I grew up on science fiction (that's "Sci-Fi" to the masses, SF to purists like me) and my first SF book was, as I recall, Robert Heinlein's "Tunnel in The Sky" which I enjoyed but, at the age of 12, I think was a little beyond me. I went on to read more Heinlein (much to my friend and fellow author Ben's distress I rather like his work... well at least up until he started insisting on making every book a "meaningful" epic), picked up on Asimov, Aldiss, Pohl, Hugh Walters (very much a children's author), Niven, John Christopher (the "Tripod" stories) and many more excellent SF writers besides but the truth is my favourite genre is "Space Opera" and, as I grew up, I became firmly convinced that the best author of space opera was one, Edward E. "Doc" Smith. I have re-read his books many times since and, though they have dated considerably, they remain entertaining. I admit it is now possible that I've read better. 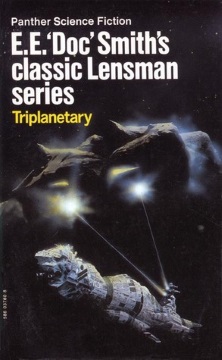 E.E. "Doc" Smith wrote many books, many of them similar in feel but all of them utterly riveting to read. He also wrote some in cooperation with others, "The Family d'Alembert" series for instance. I have read some of them and suspect, without a shred of supporting evidence, that his personal involvement in them was minimal. The works for which "Doc" Smith (he was a real PhD, a chemical engineer apparently) is most famous are the "Skylark" and "Lensmen" series and, whilst the former was good, it is the latter upon which I will concentrate. The Lensmen series were six, arguably seven, books written by the good doctor predicating on the ultimate battle between good & evil ... two incredibly ancient races using very similar methods but standing for diametrically opposed ideals. One race, the Arisians, were "good" inasmuch as they were relatively benevolent, represented the higher ideals of our society (freedom, advancement, intellectual, telepathic & psychological development). The other, the Eddorians, were "evil" inasmuch as they were ruthless and represented the worst aspects of human nature, believed in total domination, each individual seeking only absolute power. The complete series, including the debatable seventh book, is as follows: Smith uses the terms "good" and "evil" in a relative sense as the Arisians, brain-like creatures of humanoid stock are entirely capable of violence as they attempt to "shepherd" the younger races along and, like a farmer, occasionally weed out those unfit to survive with the aim of producing the final finished product ... a race that would ultimately exceed & displace them in their role as guardians of our universe. Of course, this kind of idea is, in many ways, very much in line with those who believed in social evolution and eugenics of that time. Very much the thinking race with individuals concentrating on their visualisations of the entire universe down to its finest details past, present & future the Arisians might be considered a kind of race of Buddhist's ... with fangs! The Eddorians, on the other hand, by no means mentally inept (no single Arisian could destroy an Eddorian in single, mind-to-mind combat) were philosophically opposed to pure mental development (except as a means to an end) and favoured a much more mechanistic approach to achieve their goals. 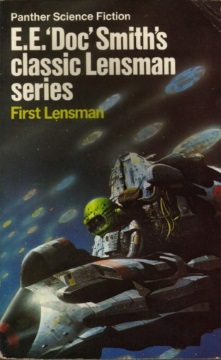 To give a little of the storyline away the Arisians are alone with the younger races in our universe (nurturing them and, much like any parent, planning for their eventual growth to adulthood & maturity) when the Eddorians moving from universe to universe in search of something to dominate arrive in ours and, observing the millions of inhabited planets about to appear (at that point two galaxies are passing through each other causing millions of "near misses" and the formation of billions of planets) and races in ours, decide to stay and for many millions of years work to create a universe suited to their taste (a taste, quite naturally, completely in opposition to the Arisian vision). Early in the story, and quite by chance, a young Arisian allowing his mind to wander the universe "bumps" into an Eddorian and realises the awful implication of their (the Eddorians) existence ... if the Eddorians, now aware of the existence of the Arisians, are allowed to continue in their plans they would ultimately destroy both the Arisians and the super race they are developing to supersede them. He immediately summons his mentors (in reality a fusion of four mature Arisians) who by surprise invade the Eddorians mind and suppress all knowledge of their existence. From that point on the clock is ticking and the longer the Arisians can keep from the Eddorians knowledge of their existence the longer they will have to forge the necessary weapon to destroy them. The Arisians plans are forced to change and they accelerate their development of the younger races but with the more focused intention on developing one of them with the capability of defeating the Eddorians. 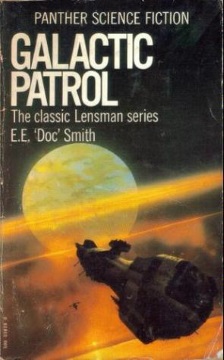 Over the six books the Arisians and Eddorians take more and more background roles (though you are always left conscious of the fact that they represent, like "Gods", a titanic battle of wills acting behind the scenes) and the story concentrates on several human and non-human characters in the story, firstly Virgil Samms ("the First Lensman"), then Kimball Kinnison & alien counterparts lizard-like Worzel, blocky Tregonnse and frigid-blooded Nadreck. The stories feature very stark, cartoon-like, characters ... the Lensmen are good (human Lensmen are always loyal, trustworthy, dependable, honourable, strong and, whilst not suicidal, willing to die if need be to defend that which they value so highly), civilisation is at war with Boskonian pirates & ultimately with a galaxy-wide culture diametrically opposed to their own with no quarter asked or given. 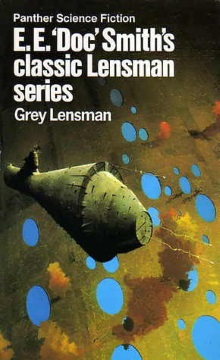 And running throughout was "The Lens" a device more psychological than physical, almost more mystical than technical, which confers upon its wearer (the "Lensmen") the ability to understand the thoughts of others no matter what language they spoke and, if used properly, more advanced telepathic abilities. "The Lens" acting as an advanced symbol of the Lensmen (impossible to duplicate, pointless to steal), the police of civilisation any one of whom can act as judge, jury & executioner if need be. "The Lens" which, when it is not in contact with its owner, interferes so strongly with the life force of any other being that they die under sustained exposure, also disintegrates within minutes of its owner's death. "The Lens" whose wearer could be nothing but good because it is established early on that those who venture to Arisia to acquire their lens with less than honourable intentions never return. "The Lens" represented justice, morality, strength, intelligence & virtue and no wearer of "The Lens" could be bribed, cajoled or persuaded against his will ... you could, you would, rely on any Lensman. On the face of it, the entire set of stories and the concept of the stories seem ludicrous ... ludicrous stories set in an unrealistic universe with cartoon characters. And yet, like many such requiring us to believe such ludicrous characterisations ... it works and it works because the rules of this universe are established early on and because of "The Lens." 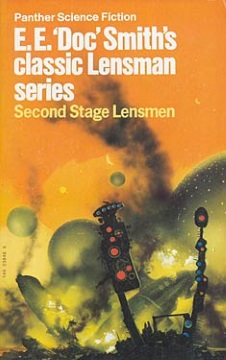 So why do I feel that these books were so good when it is so obvious that, in classical writing and character development terms, they plainly aren't and, to put it bluntly, to use the term "literary brilliance" positively in association with "Doc" Smith might be considered tantamount to committing a crime against the intellect? Why do I feel that a writer with so many negative aspects (to my mind he was, quite possibly, both racist and sexist) was such a superb storyteller? 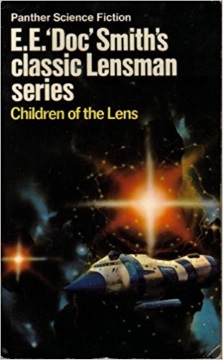 I think it has more to do with the scope of the tales ... the sheer breadth & epic nature of the stories are awe-inspiring as they cover the development in adversity of our civilisation from before life began on our planet to the ultimate forging of the new anti-Eddorian weapon and the development of a replacement race of guardians of the galaxy. Add to that the brilliant escalation & advancement of technologies and telepathic skills, the rapidly increasing size and breadth of the battles, the use of planets and stars as weapons and ultimately of love & sacrifice are simply breath taking. Yes, to read & enjoy the stories require absolute suspension of your disbelief ... even more so today. I mean it is absolutely ludicrous to imagine a story set in the far future where characters still use slide-rules, operate controls made of Bakelite and record events on "wire" yet somehow that is almost irrelevant and you can only hold your breath as planets disintegrate from the inside out and ships dart through the ether blasting foes with primary beams, mopping up the mess with their only slightly less powerful secondaries. Add to that was the fact that I loved the cover art work which, when I read it, was by Chris Foss. I wanted to fly those ships ... I wanted to be that Lensman ... I wanted ... Can you blame me? I was young ... I wanted to fly my undetectable speedster 'free' from Tellus (Earth) to the Second Galaxy (Andromeda). I wanted to inert her and fight her into a rough orbit around a Boskonian planet. I wanted to let my mind roam through the Pirate base, take control of its commander and win the day for Civilisation (and the glamorous nurse, the heroine of the stories, of course!). 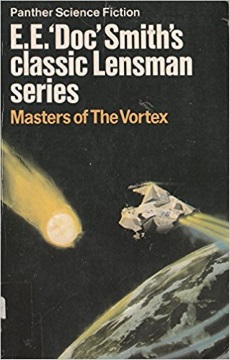 The stories are full of heroes and villains, technology (even if a little dated by today's standards) and parapsychology, epic battles and immense strategies. To paraphrase (or even directly quote) Douglas Adams' "Hitch Hikers Guide To The Galaxy" it was a time when men were real men, women were real women and small fuzzy creatures from Alpha Centauri were real small fuzzy creatures from Alpha Centauri. Though I could be lying (you'll have to read them for yourselves to figure that one) it will come as little surprise to find out that the "good guys" win but even re-reading the books I find myself wondering if they will win ... will they ... this time? I make no secret of the fact that I love 'Babylon 5' or that I view it as far superior programming to many of its contemporaries including "Star Trek" (which I still like but for different reasons) so you can imagine how I felt when I came across the following quote :-) The LENSMAN books represent that rarest of all qualities in SF: the sense of wonder, given form and texture and epic scale. These are the books I cut my teeth on as a fan, and together comprise one of the true milestones in science fiction literature. Let me be plainer: BUY THESE BOOKS ... you won't regret it!" Michael Straczynski, author and series designer of "Babylon 5"
Thanks for reading. James C. Rocks, Author ("The Abyssal Void" Trilogy)

It can only be attributable to human error.