I love popular science and so it was with some excitement that I opened the new Hawking work, especially as I've enjoyed his other books so much. It's fair to say that the style is somewhat different. It has been said of his first book 'A Brief History of Time' that despite its sales popularity practically nobody ever finished reading it and this may be so, I'm not in a position to comment since if true it means that I'm practically nobody anyway. 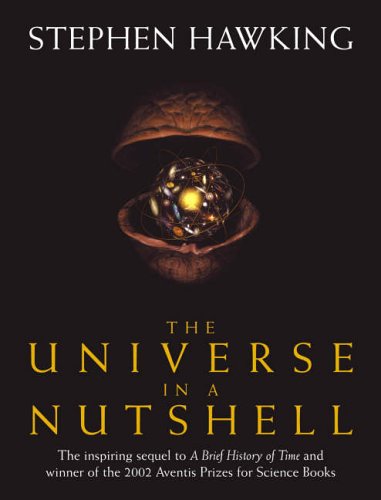 When I was a child I used to swim in the sea. This wasn't before the water became polluted but it was before we all knew how polluted the water was so that was fine. Swimming in the sea is fun, the waves are fun, the salt is fun, there is much enjoyment to be had from simply yelling and swimming about. There is a dark side to it though; we knew it as 'the shelf'. A point existed, rather vaguely defined, where the depth would dramatically and inexorably increase, the water would become colder and the fun would stop. There lay the music of John Williams and frantic calls to the Coastguard. Popular science is like swimming in the sea. All is jolly and fun and you don't have to tax your mind until, suddenly, you reach the shelf. This book attempts not only to reduce the shelf but even to make it go away altogether and for the most part, it is successful. It is presented with lots of pictures and plenty of whitespace around the text, there are cartoons, diagrams, amusing asides and hidden in there some pretty interesting information. This is where the book works well. Sadly the pictures are often not accompanied by helpful captions explaining what they represent; sometimes it is obvious, sometimes not. The text seems a little abbreviated in order to make room for all that white space and this also means that the sudden introduction of ideas is common. The first one I encountered was when the book begins to discuss imaginary dimensions with no explanation other than mentioning that they work like imaginary numbers. It is difficult for the reader to visualize the concept. To be fair the concept is impossible to visualize anyway but a slightly more circumspect introduction could have helped. The structure of the book really helps with understanding, however. The first two or three chapters deal with the basic concepts and do so for the most part with ease. After that the chapters each deal with a different subject and are not reliant on having understood the others that have gone before, this makes the book easier to read but, vitally, it becomes possible to read a chapter now and again rather than ploughing through in one go in the hope that the early information will stick in the mind long enough to understand the end of the book. It does detract from the narrative because it makes the experience of reading the book rather like reading a series of small pamphlets that just happen to be bound together but it makes the process easier and a lot more approachable. Ultimately a book of this type succeeds or fails entirely by the quality of writing and here there is nothing to complain about, everything is very clearly written and there is never any ambiguity over meaning. The book approaches some extremely complex subjects with simple frankness and without devoting pages to unnecessary detail; obscure and technical theories at the coalface of physics are covered with gentle ease. It must be said that I found the layout rather too friendly, a slightly more conventional approach would perhaps have suited me better, but overall I found it to be a good read. The best thing about this book is undoubtedly the currency of it. This is a very recent survey of the science of cosmology and it is a guided tour through the latest work led by a man almost uniquely qualified to point out the tourist attractions, no other book in my collection is as current, nor does any current author on my shelves carry greater distinction than Professor Hawking.
In all this is an excellent read, often imaginative and humorous, by a distinguished and authoritative originator and I feel as always when I read his books what a pleasure it is that such a man stoops to satisfy the curiosities of the layman as well as advancing the science itself. Ben Slythe (author: "Soldier of the Republic" series)

Only one human captain has ever survived battle with a Minbari Fleet. He is behind me. You are in front of me. If you value your lives, be somewhere else!