To date, I have read only one other book by Douglas E. Richards, it was called "Brain Web", the second of the Nick Hall series, and I enjoyed it. I'd only recently started reading thrillers so the slightly-science-fiction, post-human twist of "Brain Web" was something I could get to grips with. Not having read many thrillers, I can't say for sure how original it was as a concept but to me it was. 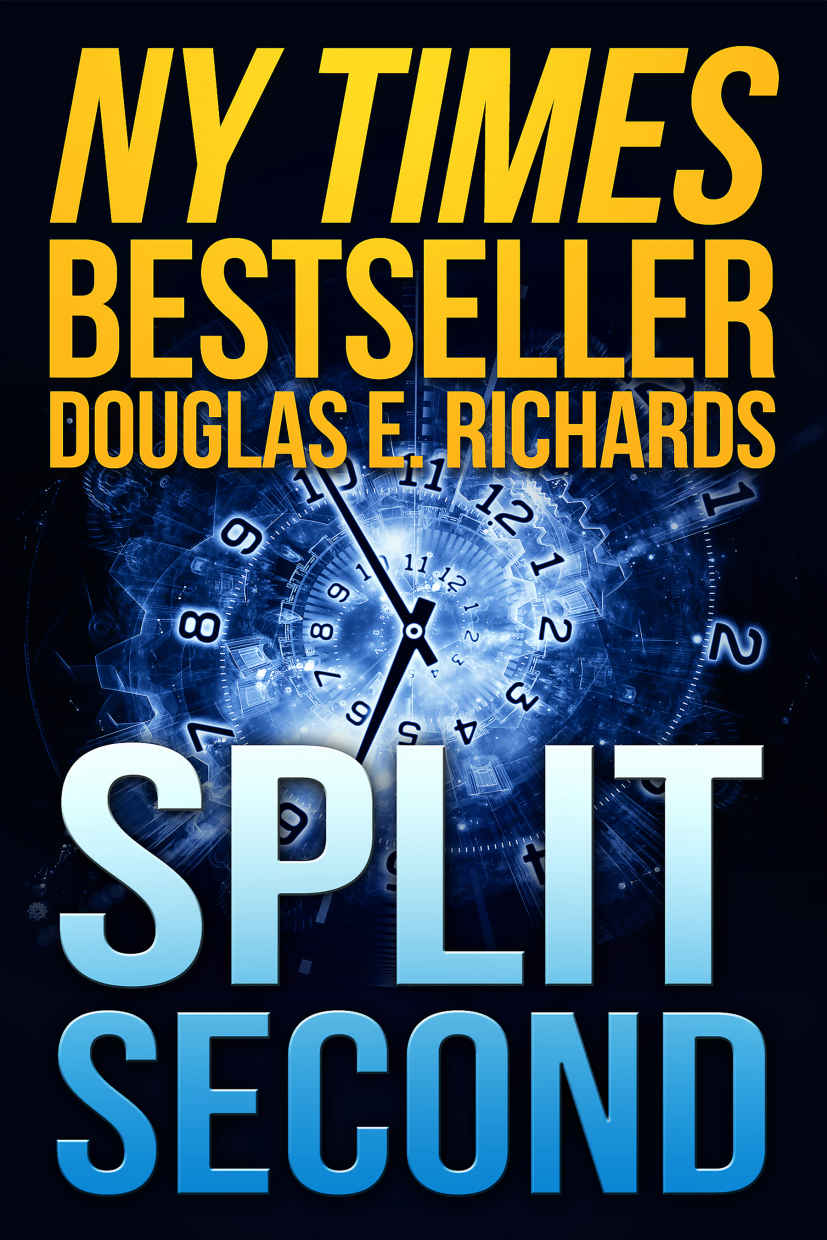 Likewise, "Split Second" is again a thriller and again, dealing with a fairly original time travel idea, another slight science fiction twist. The basic plot involves the discovery that time travel is theoretically possible, not time travel like "The Terminator" a film I love, but the idea that time travel could only happen across a microscopic period of time. Naturally enough this immediately raises the question in the reader's mind, "What on Earth good is travelling back such a small amount of time useful for?" The book of course ultimately reveals what use such a technology could be which is where it the book gets rather interesting. Time travel is something of a mainstay of Science Fiction but this isn't sci-fi and whichever way you look at it, it's a fairly original idea told as a solid thriller. Cover aside there are no pictures in the book but the author makes up for this splendidly, providing a detailed and very readable appendix telling how he came up with or researched the various ideas as well as talking about their originality. There is some romance in the book, clearly important to the plot, but it is sensitively handled and kept mainly in the background. Whilst I can't go into any real detail the plot involves murder, kidnap, betrayal, loyalty and those trying to action and prevent global domination all set, it seems, in a relatively discreet geographical area of America. There's a fair degree of suspense in the earlier half of the book especially since I had no real idea where the story was going but, as the various pieces fell into place, I found myself able to predict possible ways the story might go even if I couldn't do so exactly. The story was also fairly violent and has a fair amount of swearing, especially in the beginning, but it was well handled and typically relevant to the progressing story. Character depth, is more difficult to assess, although I found the primary male lead's character a little stereotypical, the author's skill came to the fore and it didn't bother me at all, I actually rather liked him. As an aspiring author and a grammar pedant, I am frequently surprised by the number of authors apparently unable to either spell or use proper English grammar so it was an absolute pleasure to read this book, I can't honestly remember a single error beyond those clearly the product of national differences. My scores: This book is a thriller but could easily be classified as science-fiction as it is based around time travel but of a form that is both novel and, thanks to the author's writing style, approachable. I tend to be busy in the day but like to read every evening before I sleep and some books are hard to keep reading, others are easy. This book fell easily into the latter camp and, on a personal basis, I found it hard to put down, in fact, my regular reading time was something I looked forward to. I would have no hesitation at all in recommending the book to anyone who is a fan of either thrillers or Sci-Fi and it is my sincere hope that Mr Richards will write a sequel.
Thanks for reading. James C. Rocks, Author ("The Abyssal Void" Trilogy)

Orthodoxy means not thinking–not needing to think. Orthodoxy is unconsciousness.