Firstly, Scientology... I'm an atheist so I'm not keen on religions. Even so, I recognise that some religions do good, even if they tend to do it with a price attached. Sometimes that price is literally financial but I mostly mean, if I may loosely use the terms, to your soul or spirit. Secondly, Hubbard was, in my opinion, a generally inept writer; his early short SF stories seemed hopelessly derivative and his Mission Earth series some of the worst stuff I've ever read. Thirdly, "Battlefield Earth", the movie, whilst not literally awful, was anything but good. 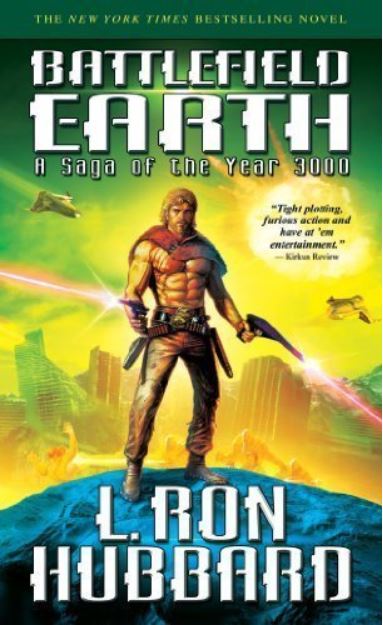 You might get the impression I'm not a fan of all things Hubbard yet somehow, I've always had a weakness for "Battlefield Earth" the novel. It is not, by any stretch of the imagination, brilliantly written in fact it's still utterly derivative. However, it is epic in nature spanning the entire galaxy even whilst it focusses on humanity. The scope of the novel is just plain huge, breathtaking in scale and captured me in a similar way to other huge novels like Tolkien's "Lord Of The Rings", like "Doc" Smith's "Lensman" & "Skylark" series. It's pulp science fiction, pure space opera, completely switch brain off and enjoy the ride. Though it will never win any awards (and quite rightly so) it is, in many ways, an old style, ripping good science-fiction yarn. As I say above, I'm not a fan of all things Hubbard, but there are others out there who feel the same. I'm not saying their views are stronger but it seems to me some lack a sense of objectivity. Just because I don't like Hubbard, his misbegotten religious abortion or most of what he wrote is no reason to slate something that has [some] good qualities when, at least to me, it does. I originally wrote this as a shorter piece on Amazon and, naturally enough I suppose, I got slated for it. One gentleman took my comment about switching one's brain off with sarcastic comments suggesting even monkeys could not switch their brains off for that long (the novel runs to over a thousand pages) and went on to imply it wasn't possible since the book was that bad. To his credit, when I responded he was reasonable and offered "kudos" to me for being able to read it, a backhanded compliment of sorts I suppose. Another gentleman attacked that view to suggest that someone might do the same for dog faeces at which point I raised an argument I have long felt to be true. The problem, I argued, was that those who make such criticisms implicitly suggest that their view is the correct one, that in criticising the fact that I dared like a book so "evidently" awful I was somehow demented. But as I pointed out, it assumes that the critic (for want of a better term) knows what they are talking about. As you might expect, I have views on that. Ultimately, I don't really care whether a person is an idiot, an author or a critic (or even all three as frequently seems to be the case) it seems that in many cases they really don't know what they are talking about. But how can I say that? Is it not true that there are books that are, as my second critic suggested, little more than excrement? I do not believe so. This argument refers to any form of art but I am specifically referring to novels in this case. A book/story is an artistic piece of work and no one, regardless of how precious their views are, can define what is good or bad about any given piece of artistic work. That includes novels generally regarded as dire such as "Battlefield Earth" which means that I am free to reject such opinions out of hand as they have no greater, or indeed lesser, value than my own. If that is correct (and I freely admit I may not be) I would expect that person to demonstrate I am so. Maybe it's my rationalist/scientific outlook on life, the universe and everything but if it were literally possible to say with any surety that a given novel is good or indeed bad I would expect that to be a process or formula that establishes all the necessary characteristics of proficient writing and can subsequently evaluate them. Such evaluations must, of course, be empirical otherwise they simply reduce once again to a form of opinion. Most of all, they must be consistent and that is where my critic's views fell flat on their faces since it was clear they did not treat all authors and/or novels the same but were, instead, exercising their prejudices. So, to those of you who would criticise me for my taste in reading (or any other art form), I simply ask you to justify your views using a formula or method which can be followed rationally (and consistently) that will demonstrate that those things I like, the apparent object of their ire, are better or worse than any other. Until you can do so, and I happily challenge you to try, I think it is entirely valid to accept my opinion as of equal worth to any others and accept that your opinion is as subjective as mine and no more valid. In other words, please shut up until you know what the hell you are talking about.
Thanks for reading. James C. Rocks, Author ("The Abyssal Void" Trilogy)