I'm a geek, an atheist and [somewhat] pro-science but I still love Christmas so is it any surprise that I love humorous pieces like this one? It's arguably one of my all-time favourite pieces of Christmas fun. Bear in mind this was first published way back before the millennium so some of the figures are a little dated; for example, there are probably around two and half billion children in the world today compared to a mere two billion back then. Let us begin :)

On or around Christmas, Santa delivers presents to all the good children of the world. Like all claims, this needs to be rationally examined. In conclusion ... if Santa ever DID deliver presents on Christmas Eve, he's dead now. BUT!!!! Why leave it there when I can add another (found while searching the net) :)
While pondering the existence of Santa Claus at a very young age, I was governed by the edict "Those who don't believe, don't receive". This ensured loyalty to the legend. However, over the years I developed the mind of a scientist and I collected sufficient evidence to lead me to postulate the theory of Christmas Physics, all of which explains Santa Claus and his reported doings.

Christmas Physics is a distant cousin of quantum theory. The Christmas phenomenon energy units, or "santas", are convertible to units of standard energy, times and space. This allows the apparent impossibilities of flying reindeer, around-the-world trip in one night, etc. "santas" are generated by particles of "spirited" matter, known as "elves". "Elves" exists in nearly all living beings capable of doing good deeds or acts of kindness. As "santas" are generated, the being feels a sense joy/happiness/jolliness. However, a critical mass of "elves" must be present to start the energy transformation. Only certain beings have a high concentration of "elves" and can generate the huge "Santa mass" required. These are the "Santa Claus’s of our legends. 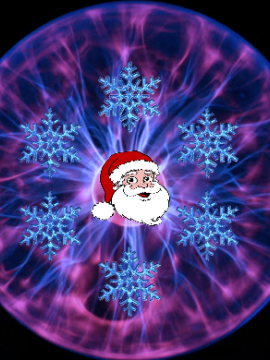 The shorter, colder days of winter and small children act as catalysts for this reaction. These catalysts allow beings with average amounts of "elves" (less than "Santa mass") to transform a limited amount of "santas". Unfortunately, anti-santa energy, "humbug", can disrupt the local field effect of "santa" conversion. The origin of "humbug" is unknown but may be related to bad plum pudding and holiday traffic jams. The interaction of high-energy "humbug" and large "santa mass" can lead to the "scrooge cascade". The result of the cascade depends on the quanta of each in the interaction. Of course, this theory is not restricted to Western cultural legends. As most large populations have similar legends, this must be a universal occurrence. Therefore, the Santa Claus story is not so much a fairy tale but a misunderstand of specialized physics.

What's My Proof? Every day you see bits of "santa" expressed by our "elves" - in acts of kindness and generosity, in the hope of peace, in the belief of a higher self. We seem to catalyse our "elves" around Christmas. We make time to do things we never have time for the rest of the year. We find addresses of old friends we contact only once a year. We express feelings we otherwise keep secret. We expect the same from others.

So, at Christmas time, let's work together to reach critical "santa" mass and make miracles happen...
Naturally, I vastly prefer "The Physics of Santa Claus" and probably always will :)