The Kashima Corporation D20 fighter/bomber is an older generation vehicle primarily designed as a heavy bomber with minimal fighter capability, it is affectionately regarded by its crews and given the nickname "Arashi" ("Storm"). The craft is fairly fast and can give and take punishment but, although it can do considerably better than the MSS Cobra F117A, it cannot manoeuvre very well. The D20 is a true spaceship possessing no atmospheric capability but in space it is not only capable of delivering significant payloads from very high orbit and has excellent defensive systems. Although it is not atmosphere capable, it can penetrate atmospheres to some depth (as far as 50 kilometres from the ground at standard gravity) in order to strike at ground and mobile targets using smart missiles and bombs. Moving fast at 50km, D20s are difficult to target because of their defensive capabilities and because they can escape to space if missiles get dangerously close. Their major weakness is their vulnerability to fighter attack although it would take lightly armed fighters (such as the Viper III) some significant time to wear them down and the cost would be extremely high. 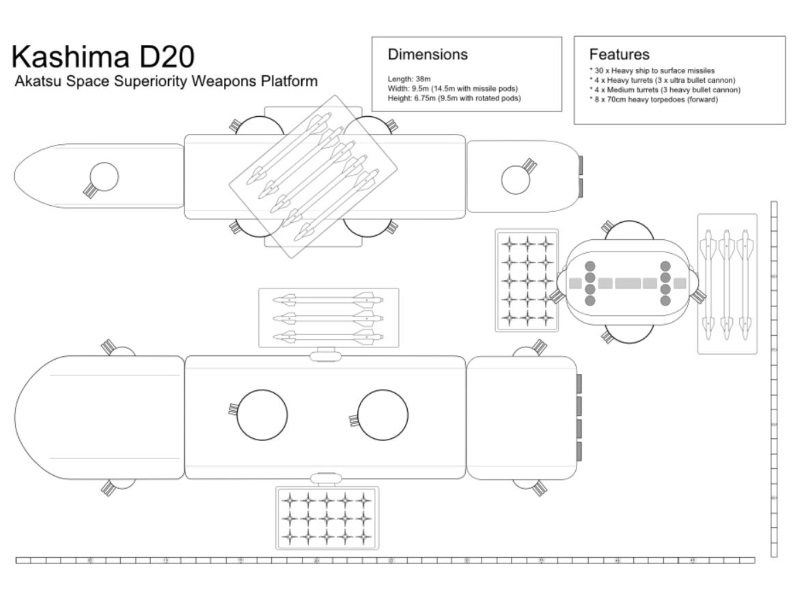 At nearly 38 metres long, 6¾ metres high and 9.5 metres wide, a series of box-like compartments, the D20 is an ungainly craft but a "packhorse" as it can be fitted with struts that can carry more munitions. The rear of the ship is dominated by rocket exhausts powered by four class 2 nuclear reactors which also power the ships internal systems and thrusters. The ship is the heaviest fighter/bomber fielded by the Akatsu and, fairly massive (heavy) with acceleration up to 22G acceleration (the crew must wear Immersaline flight suits), remains a fairly useful machine. It has hardpoints for additional solid fuel boosters. The ship has short but permanently extended landing gear and is equipped with magnetic landing grips leading the UCS and Skean to nickname the vehicle, "Warthog". The D20 has an electro-reactive hull constructed of layered ceramoplastics and heavy punishment absorbing and materials; the hull has basic camouflage capability. It has a crew of 5 with pilot and co-pilot (usually lead officer) sitting under the front, six-sectioned, canopy; it has semi-domed viewports as well as top and base and rear hemispherical viewport/gun emplacements. Each triple-gun gun emplacement carries a gun kinetic, single laser assembly. In addition, the ship carries 3 light 20mm kinetics (forward facing, 1 to each side, 1 top), 3 medium 50mm kinetics (forward facing, 1 to each side, 1 under), 2 heavy 100mm kinetics (forward facing, both central and internal) and 1 detachable (rear mounted) mine. Like most ships of this class the D20 can be extended using computer-linked struts; the D20 can be fitted with 4 struts (in a diamond style configuration) each able to carry 6 bomb & missile hardpoints and each equipped with 2 additional thrusters (front & rear facing, end of strut) to improve the ship's poor vacuum manoeuvrability. Missiles are usually armed with approximately 1 metric tonne of HKA whilst bombs and mines can be armed with up to 5 metric tonnes. The D20 has eight manoeuvring thrusters position left/right/top/bottom to the front and rear and its two engines are capable of accelerating the craft up to 25G which requires the crew to wear heavy-weight Immersaline flight suits. Each crew has a pilot and co-pilot (usually the commanding officer) as well as three gunners each of which will have alternate roles (navigator, engineer, comms etc.); flight control is by a fairly conventional joystick, panel and pedals set up but, under non-battle conditions, the ship's onboard ship will pilot the craft. The inside of the D20 is single-decked and, for a full 5 person crew, somewhat cramped meaning that the crew have to spend most of their time at their duty stations. On the plus side their chairs convert fairly easily into easy recline mode which, in combination with their Immersaline flight suits is considered fairly comfortable. The ship is able to provide full life support for 5 crew members for around 36 hours which is more than enough for most missions given that carriers typically deliver them to their mission area. Basic facilities include a galley, shared bunks and a toilet; the ship is designed to support only the 5 recommended crew. The command deck includes all 5 stations with 3 situated on the right side of the central kinetic torpedo launchers and two on the left with the forward station (co-pilot/senior officer) having more room than other stations because it is designed to act as possible task group or fleet command. Information is displayed on organic panels in front and to the sides of each station (the command station has more screens situated all around). The D20s onboard computer has voice/gesture activation & response (VGAR), friend & foe aware systems (FFS), fire/damage control & repair system (FDCR) and communications encrypt/decrypt (CED).

The first draft is just you telling yourself the story.