The Sakori Corporation B9F fighter/bomber is a more recent Akatsu craft primarily designed as a heavy fighter/light bomber for fast strikes missions. The B9F has been given the nickname Taifū (Typhoon) and the crews love the amount of punishment it can dish out and often take. 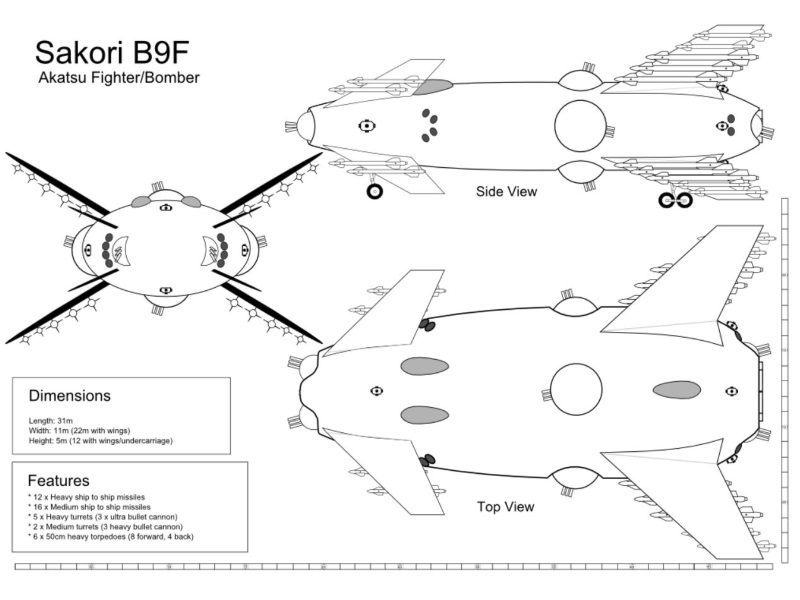 The B9F is a flexible craft able to work in space or in atmosphere although, lacking deployable wings, it needs to be configured pre-mission for the appropriate environment. In an atmospheric configuration, the B9F can work down as far as 10 kilometres from the surface even in the murkiest of environments but surface gravity must be less than 1½G otherwise the ship may not be able to climb the gravity gradient. The major weakness of this craft is its speed and manoeuvrability, its greatest strength is its heavy armour and armaments. Like many of its siblings, the B9F is an elongated oblate, pointed barrel shape (a flattened needle) but it is covered in tiles that give it a more reptilian appearance. Not as ugly as the Kashima D20 and nowhere near as large as the MSS Cobra F117A it is, at 24G, slightly faster than either. The ship is just over 25 metres long, 3.5 metres high and 5 metres wide and is, depending on who you talk to, the most hideous looking craft available or a thing of stunning beauty, a cross between a lizard and an insect. Moreover, it can be fitted with struts that can carry more munitions. The rear of the ship is dominated by rocket exhausts powered by three class 2 nuclear reactors which also power the ships internal systems and thrusters. The B9F has 8 manoeuvring thrusters positioned in fours front and rear... computer-linked, these thrusters combine to give the B9F a reasonable manoeuvring profile. The ship is the second heaviest fighter/bomber fielded by the Akatsu, not as massive as the D20 but with better manoeuvrability and Immersaline suits must be worn when at high speed or when manoeuvring in battle. Nicknamed Walrus by the UCS and Skean, it has hardpoints for additional solid fuel boosters, retractable landing gear and is equipped with magnetic landing grips. The B9F standard armament includes: Like most ships of this class, the B9F can be extended using computer-linked struts, the struts fitted in a flattened diamond configuration and each able to carry 4 bombs/missiles hardpoints and each equipped with 2 additional thrusters (front & rear facing, end of strut) to improve the ship's manoeuvrability. Missiles are usually armed with approximately ¼Tn HKA warheads, whilst bombs and mines can be up to 1Tn. Alternatively, the craft can be fitted with aerodynamic stabilisers ("wings"), fully computer linked and providing a fairly good atmosphere profile but they reduce manoeuvrability in a vacuum. The B9Fs 6 standard crew require no assistance to board or prepare their ships once maintenance, refuelling and rearming is carried out and the ship can fly for up to 72 hours as the ship has basic facilities such as galley, shared bunks and toilets and the crew normally wear standard heavy Immersaline heavy weight flight suits on duty. The command deck has 6 stations, 3 each on either side of the central kinetic torpedo launchers, with the primary command stations (pilot and co-pilot/captain) forward, secondary navigation and engineering behind and gunners to the rear. The ship primarily uses organo-plastic displays for technical readouts and holographic/touch & gesture sensitive control panels to run the ship. Pilot control is the standard two by two plus sensitive touch panels and, in addition, the ship has an onboard computer with sophisticated voice recognition and control capability. The B9F is an excellent weapons platform able to launch missiles, bombs and has good defence capabilities. The B9Fs onboard computer has voice/gesture activation & response (VGAR), friend & foe aware systems (FFS), fire/damage control & repair system (FDCR) and communications encrypt/decrypt (CED).