The Sakori Corporation M6Z fighter is an older generation vehicle primarily designed as a medium fighter for fast responses and quick strikes. The M6Z is rated highly by Akatsu speed-freak pilots and given the nickname Saikuron (Cyclone)... the crews love that it is fairly fast, able to get in fast, strike and get out again. 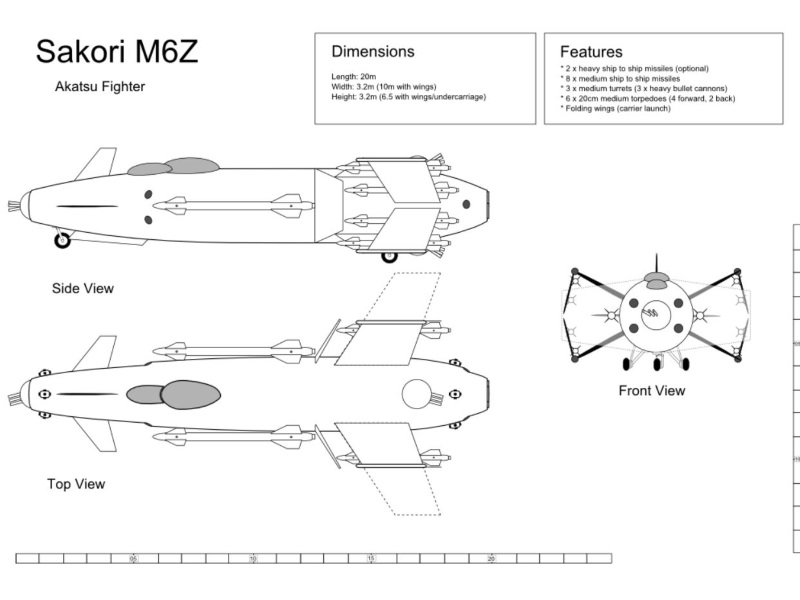 The M6Z is a flexible craft able to work in space or in atmosphere although, lacking deployable wings, it needs to be configured pre-mission for the appropriate environment. In an atmospheric configuration, the M6Z can work right down to the surface of a planet as long as that atmosphere is clear (transparent) and gravity is less than 2G, beyond which the pilots risk being unable to escape the gravity well. The major weakness of this craft is its light armour and relatively light armament, its greatest strength is its speed and manoeuvrability. Like many UCS smaller fighters the M6Z is an elongated oblate, pointed barrel shape (a flattened needle) but is slightly larger with a raised central body to accommodate its crew of two. The craft is 2.5-metre-high (just over 3 metres with its landing gear extended), 4.5 metres wide and 18 metres in length with both crew members sitting slightly reclined and the second crew member (navigator, co-pilot and auxiliary gunner) sitting behind and slightly higher than the pilot. Both crew members wear heavy Immersaline flight suits allowing the ship to accelerate and manoeuvre rapidly at up to 30G (the ship itself is capable of 55G). Both crewmembers have direct outside views but, like every other pilot, also rely on information displays... the pilot's chair is fixed in a forward orientation but the navigator can rotate his chair freely to allow almost full global detection which is especially useful when acting as gunner. The M6Zs crew require assistance to link them in to ship systems (linking and pre-flight checks can take up to an hour) and recommended exposure is 8 hours with a maximum of 16. In addition, protecting against high g-forces the crew's suits take care of all normal bodily functions since the ship has minimal additional interior facilities. Pilot control is the standard two by two plus sensitive touch panels and, in addition, the small craft has an onboard computer which has sophisticated voice recognition and control capability. The craft has no native capability to launch missiles but has hardpoints for wings/struts which can carry rocket pods or ship to ship missiles. The UCS and Skean have nicknamed the vehicle Vulture. The M6Z features two defensive turrets, dual laser or quad 10mm kinetics, controlled by the auxiliary gunner (navigator) mounted about two-thirds of the way back on the upper and lower hull surfaces; between them the guns have an almost complete coverage of the space around the ship with linked computer control that prevents the guns accidentally hitting the ships own structure. It mounts 4 x 30mm forward-facing medium kinetics mounted on the fuselage sides above and below the flattened hull section as well as 2 x 20mm, rear-facing kinetics mounted underneath. The M6Z has twelve manoeuvring thrusters positioned in fours front and rear and two each at the furthest extent of the hull width; in addition to thrusters fitted at the wing/strut tips, computer-linked, these thrusters combine to make the M6Z one of the most manoeuvrable fighters in space. M6Z pilots have even been known to balance their craft "on its tail" and hover over enemy targets using their ferocious main thrusters as weapons. The only other craft to be capable of such a manoeuvre is the Verithon Mamba. The M6Zs onboard computer has voice/gesture activation & response (VGAR), friend & foe aware systems (FFS), fire/damage control & repair system (FDCR) and communications encrypt/decrypt (CED).