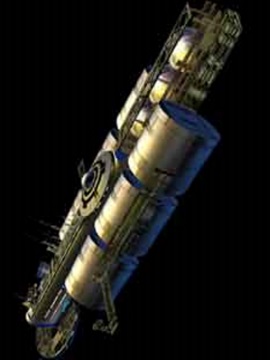 Based on a concept originally developed by the Skean, the cruise-bomber came to its own when the Geist Kaiserreich began using them in wolf-packs during the Simerian-Lacuna War. With crews of between two and five hundred the cruise-bomber, originally envisaged as an orbital bomber became the space-warfare equivalent of the submarine. Slightly smaller than light-cruiser, they are usually built around a single coil gun designed to accelerate medium-heavy kinetics with a high degree of accuracy at stationary, slow moving or relatively predictable targets. Close up, cruise-bombers can attack faster targets but are easy prey for heavier armed cruisers and destroyers so are better as a "stand-off" weapons or preying on weaker vessels. With the right kind of material, for example, an asteroid belt, cruise bombers are capable of manufacturing their own kinetics projectiles. In such scenarios, the cruise-bomber is capable of firing off staggering amounts of material at distant targets such as planets and planetary defence installations. This strategy was successfully employed to great effect by the Akatsu as they attacked and subdued a number of outposts in the Abyssal Void arena and put planets & facilities under siege. The Geist have also used cruise-bombers to devastating effect during the Simerian-Lacuna War against Saxon, Kochevnik and Pax targets. They were used mercilessly against UCS, with packs of the ships waiting powered down and near undetectable as convoys passed then opening fire when an attack was least expected. The heavy use of cruise-bombers in both Simerian-Lacuna and Abyssal Void conflicts kick-started the development of convoy and fleet protection with the development of heavily armed merchantmen. Later, a new kind of ship was specifically developed to hunt wolf-packs. Corvettes, also known as "Hunter Killers" or HKs, are specialist anti-cruise-bomber vessels. Fast, well-armed and lightly armoured, HKs are ultra-compact ships with less than a hundred crew. The Geist came back with "cloakers", cruise-bombers modified to use the latest in stealth technology including low reflective ship coatings, radar absorbent hull tiles and baffled propulsion units. Despite the nickname, "cloakers" never actually disappeared, they were just much harder to detect. The coalition responded with the development of stealth-hunter killers or SHKs with crews of less than fifty, each carrying ten or more AI fighters which were deployed to an area where enemy ship activity had been detected. Too small to be engaged in stealth-mode, the fighters forced the cruise-bomber to engage them more directly, breaking their stealth and opening themselves up to attacks by other fighters and the SHK mothership.