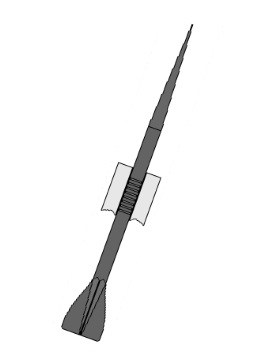 Flechettes are thin, razor-sharp projectiles typically fired from some kind of projectile weapon, more often than not, a rifle or handgun. The flechette projectile has vanes to stabilise their flight and the vanes themselves can be razor sharp to ensure that glancing impacts damage the target. Handgun variants usually fire a single flechette while rifle variants can often fire multiple flechettes. Some flechettes are combined with sabot technology allowing them to be launched at much higher speed and, shedding the sabot after launch, reach the target with much greater penetrative power. Flechettes have been banned on most civilised worlds because of the horrific, disfiguring injuries they can cause. As such, they have a tendency to be used by criminals and assassins.

The work never matches the dream of perfection the artist has to start with.