Primarily a UCS development (with limited Skean involvement), the Mobile Infantry combat suit provides marines with enhanced capabilities and protection. Marine MI is a multi-role force of mobile, mechanised infantry whose function is to attack specified targets, realise specific objectives, gain information and to cause disruption to enemy infrastructure. The majority of MI are drop troopers, frequently delivered from orbit by specialist vehicles, and might be considered the space warfare equivalent of twentieth to twenty-second-century paratroopers. 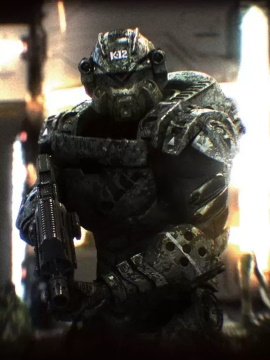 Drop troopers are usually used to establish a beachhead and, supported by atmo-fighters deployed from orbit, hold it until reinforced by more conventional units. Modern MI, heavily armoured fighters, are frontline troops, typically deployed with decoys from the rear of high flying craft... around thirty kilometres for a planet with an Earth-like atmosphere and gravity. Standard deployment is in radar and heat-shielded "Drop Pods" which fall rapidly to around ten kilometres, the pod shell automatically detonating away to create more decoy material. The drop troopers wear heavy fighting suits with onboard computers that ensure they continue to fall at the same speed as the surrounding decoys matching speed with a combination of air-brakes, sections of armour that rise from the armour to slow the marine and match their speed to the surrounding debris, and air-jets. The fall from ten to two kilometres is considered to be the most dangerous period of a drop and attrition rates can be high, varying up to twenty-five percent with about half being fatal. From around five kilometres up the marines begin to "light up" targets using rifle mounted lasers to allow guided munitions to home in on the designated targets. Parachutes are deployed for a few seconds at around two kilometres and jettisoned to slow the troopers to around a hundred kilometres per hour and aerofoils deploy to allow the marines to glide rapidly to their chosen landing site. In airless, low-gravity, scenarios the aerofoils are replaced with rocket and gyro assemblies which detach on landing. If the initial mission fails to achieve its objectives subsequent waves can be deployed but, once a beachhead is established, drop troopers are rarely used to follow up since they are considered too valuable in terms of training and equipment. Once the beachhead is established conventional MI or assault marines and armoured infantry are landed in heavily armoured assault shuttles to secure and exploit the beachhead. This has led to criticism by regular troops who consider the MI lazy and unwilling to face any real danger, however, the available data indicates that MI injuries and fatalities are slightly higher than regular ground troops. The latest version of the MI suit is the CS5 and each release features a lighter naval variant. The suit is the key advantage of the mobile infantry and offers the soldier enhanced protection, detection, strength, speed and agility. The suit acts to protect the wearer on land, in the air, in space and under water with later variants including AI integration and better health monitoring for the wearer. Standard marine weaponry includes variants of the Multi-Role Assault Rifle which can fire a variety of munitions including kinetic, explosive and non-lethal rounds as well as grenades and missiles. Later variants, like the MARV, offer mini-smart missiles, mini-UAVs and AI integration. In addition to MI, an attack will also deploy support vehicles. Many nations still use battle tank variants but the UCS use the Infantry Fighting Vehicle or IFV, a modular six or eight "sphyred" armoured vehicle capable of carrying between ten and twelve marines per module. The IFV has an option for AI control but is typically manually driven and standard armament are turreted four barrelled kinetic guns firing kinetic or explosive ammunition. The optional turreted launcher can launch smart missiles, mortar bombs, fuel/air munitions for mine detonation or emplacement attack, antipersonnel mines, anti-vehicle munitions, UAVs carrying cameras and remote designator, armour piercing missiles and/or gas bombs. The IFV was custom designed to be the fast replacement for the main battle tank and the Skean have developed a similar concept, the MSV or Military Support Vehicle, which owes slightly more to tank design and is slower but better armoured.