A number of tank-like vehicles are in use across The Extent but the UCS spent considerable technical and financial resources developing the Infantry Fighting Vehicle or IFV. 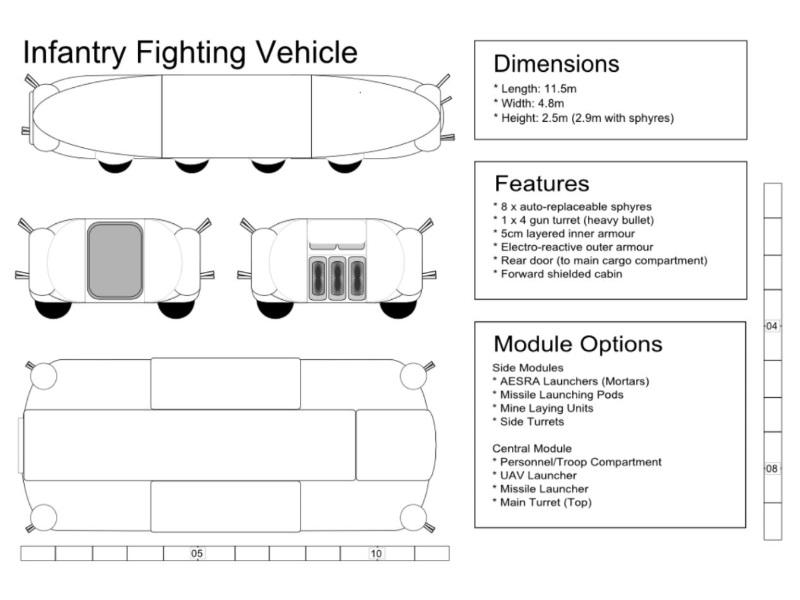 The IFV is an armoured low height truck-like vehicle available in two sizes that sits on six or eight globular, segmented AESRA Caldwell "wheels" or trackballs (nicknamed "sphyres"). The sphyre was the brainchild of technical transport Sergeant, Phyllis Caldwell, who was sick of having to leave vehicles behind because too many tyres were punctured, the hover system compromised or the tracks blown off and came up with the idea of a spherical tyre. Of course, similar tyres had been tried before but Caldwell's design took into account the nature of the battlefield and built into it were basic mechanisms designed to resist minefields and other munitions. Few people had figured out how to use the dominant technology of the age, the mag-lev based AESRA, for independently mobile vehicles but Caldwell reasoned that a spherical tyre held underneath a vehicle and driven by AESRA would work. Moreover, she reckoned that such a tyre could not only be armoured to resist explosive devices and contoured to provide appropriate traction it could, by using the right materials, be rapidly & automatically discarded and replaced by inflating a spare to replace the damaged unit. Mentioning the idea to her CO, she unexpectedly found herself being shipped off behind the lines to a research and development unit where her ideas were taken extremely seriously. Within six months the first IFV prototype was being tested and, within a year, the Mk. 1 Infantry Support Vehicle was in production; military commanders were impressed not only with the vehicle's speed and ability to traverse varied terrain but its ability to crab sideways. A year later the larger eight-sphyred Mk. 2 an armed and armoured version of the Mk. 1 was also in production along with a lightly armoured transport version. Within 5 years sphyred vehicles had become the mainstay of UCS ground forces and the Mk. 3, an improved modular version of the Mk. 2, was the most common variant with older tanks and other vehicles being shipped back home for scrap or home defence. The Mk. 3 IFV is a fast moving and versatile replacement for UCS main-battle tanks and can be configured as a land-train or a lightly armoured tank. With configurable central and side modules, it is extremely flexible with the following options: The IFVs armour is an active, multi-layered metallo-ceramoplastic consisting of anti-explosive replaceable tiles; further protection can be provided by optional small turreted guns that can create a steel wall in front of incoming projectiles. Correctly configured the IFV is capable of carrying a standard twelve-person squad and can be human or AI operated and, with its auto-replaceable sphyres, has replaced the main battle tank in most forward areas of UCS operation. The Mk. 3 IFV is 10 metres long, 4 metres wide, 3 metres high and is nicknamed "The Hog" because of its ability to power straight across rivers, mud or desert flats and up steep mountainous climes with almost equal facility. The vehicle has very small transparent armoured slits for visibility and uses external camera sensors to provide a 3D environment in the cabin for its drivers. Although modular the most standard option is as troop carrier which can carry twelve fully armoured marines, all their kit and, in addition to 4 standard kinetic turrets, various side-mounted weapon options to protect the vehicle. Its onboard computer, even without AI integration, is voice commanded and fully able to warn against the probability of incoming attack and other facilities include full radar capability, a communications suite and basic security and fire-control. Many nations still use battle tank variants but the IFV is considered vastly more flexible and designs have been passed by the UCS to their main ally the Skean who have developed a similar concept, the MSV or Military Support Vehicle, which owes slightly more to tank design and is slower but better armoured. Neither design could stand face to face with most conventional tanks but, able to mount surprise attacks more easily, can often still defeat them.

A writer without interest or sympathy for the foibles of his fellow man is not conceivable as a writer.