The Marine Insertion & Recovery Vehicle is an armoured shuttle designed to deliver marines and materials to a battle zone and extract them once the mission is complete. With 3 permanent crew, the MIRV is a fairly basic insertion vehicle with 6 deployable turrets and 4 surface mounted air-to-air missiles. Designed for stealth it has no active radar and relies on passive scanning for threat detection. 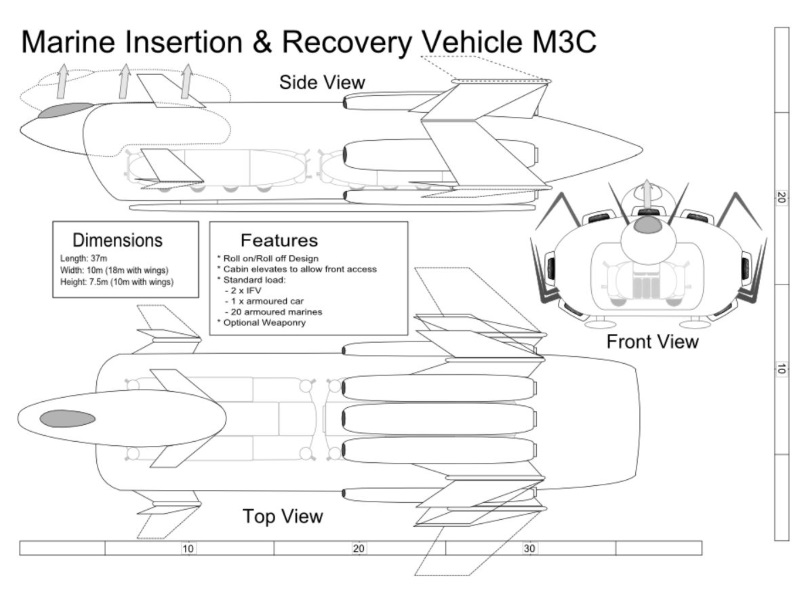 As part of the infantry fighting vehicle project it was realised that a method of delivering the vehicle and accompanying marines to a battle zone was required and the Marine Insertion & Recovery Vehicle or MIRV was the result. The MIRV M1, able to carry a single Mk. 1 IFV and a squad of marines, was adopted by the marines two years after the IFV but losses under fire were high. Almost in parallel with the development of the Mk. 2 IFV the MIRV M2A was developed. The M2A could carry 2 IFVs and had sufficient armour and speed to deliver its payload to the battle zone however it took a long time to unload and, under fire, losses were high. The current model is the M3C which is heavily armoured enough to penetrate the battle zone with a 95% success rate. It can carry 2 fully loaded Mk 3 IFVs and 20 additional armoured marines as well as a variable weapons payload that can be deployed very shortly after atmospheric insertion. With a roll on, roll off design it can unload quickly and is able to get clear of the battle zone quickly either returning to the mothership or retreating behind friendly lines until required. With 7 nuclear powered engines, the M3C is fast and has powerful underjets that enable it to land and take off vertically; its wide wings fold allowing it to be docked in compact spaces on carriers and some smaller vessels. The M3C is primarily used by the UCS although 35 were leased to the Skean to supplement their aging M2As and is nicknamed "The Stork" by the UCS, "The Whale" by the Akatsu. 37m long, 10m wide (18 with its wings fully deployed) and 7.5m (10) high. It has a roll on, roll off design with an elevating crew cabin which works well in compact spaces allowing vehicles to drive straight through one aircraft to be loaded on another. Standard load is 2 IFVs and an armoured car with the latter entering last and being stored on the rear door. Additional supplies or up to 20 marines can be located above the primary cargo deck. With no The M3C has 3 permanent crew, the lead pilot and acting captain along with two marine gunners. Basic facilities include toilets and a small pilot's galley but very little else as missions tend to be very short duration... life-support is capable of handling the crew and a full human cargo for up to 12 hours. The hull is layered steel, plastic and foam metal and is considered to be relatively resilient against attack with the ship able to mount up to 6 deployable turrets as well as carry 4 surface mounted air-to-air missiles. Command facilities are fairly basic with no voice activation or friend/foe recognition systems. The ship does not have active radar and relies on passive scanning for threat detection however it is built to infiltrate and therefore was designed with stealth in mind. It does have excellent damage and fire control systems and, with reporting a huge part of most missions, a good communication system.

Never let your sense of morals prevent you from doing what is right.