The MSS Cobra F117A is the first of a new series of Military Space Systems Space Superiority Weapons Platforms and is primarily designed as an orbital bomber with limited multi-role capability. 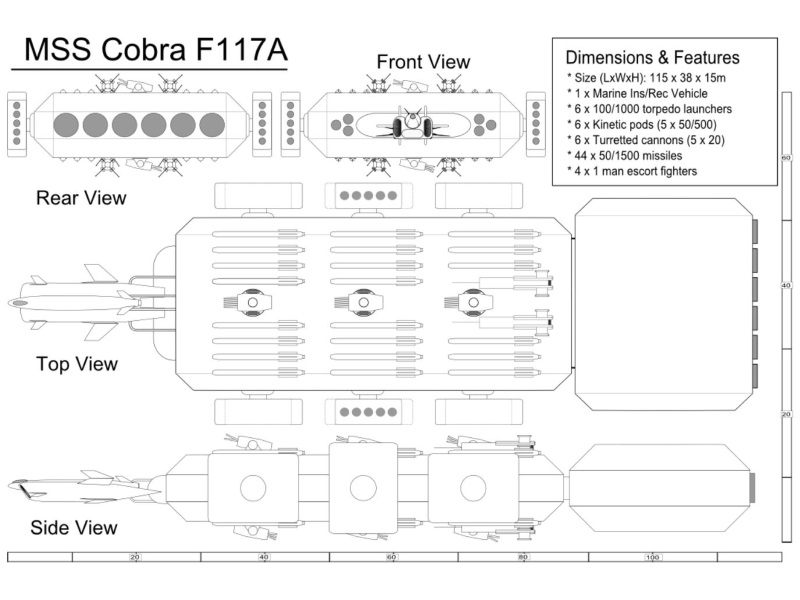 The F117A is highly regarded by the crews that fly them and cynically derided by those that don't, especially the crews of much faster fighters, its official nickname is "the Leopard" but there are fighter jocks that call it "the Rhino" likening it to a lumbering beast. What the crews love and none of its critics can deny is the formidable armaments it carries and its ability to both absorb and dish out punishment. The F117A is a true spaceship possessing no atmospheric capability something that doesn't faze its admirers because the ship can instead sit in low orbit and bombing fixed enemy installations and guiding remotely controlled stand-off weapons down onto more mobile targets. At those heights, typically around 150 kilometres, ground defence installations have great difficulty attacking them because they are manoeuvrable enough to avoid kinetics, carry enough defensive firepower and ammunition to shoot down incoming missiles and the defenders have to struggle against a gravity gradient. The only real defence against the F117A is large, powerful, lasers either ground-based or orbital (usually the former because orbital assets will typically have been dealt with prior to insertion) - fighter attacks are often pointless because the F117A carries 4 defensive fighters and usually deploys with a task group of additional support fighters. The Akatsu nickname for the F117A is "Sandstorm" because of the ferocious dust storms that result from the heavy kinetic attacks they typically launch. At nearly 115 metres long, 17 metres high and 40 metres wide the F117A is a formidable beast, it has no wings but the engine nacelle can be fitted with disposable struts that can carry even more than it's already considerable load, weapons that would be used in the crafts opening salvos and their struts ejected. The entire back of the ship is dominated by the engine exhausts of 6 class 3 nuclear reactors which also generate the power for its defensive weaponry. Massing over a thousand tonnes the ship is not particularly manoeuvrable and, though Immersaline suits must still be worn, the F117A maximum acceleration can only manage 20G. Crews tend to love the Leopard even though a tour of escort duty for a task group of F117As is considered potentially life limiting and one of the reasons the ship has earned the nickname "Rhino". The body of the F117A is composed of two huge brick-like units, the larger one the weapons platform and the smaller (though wider) one the engine nacelle, along with a front mounted MIRV that serves as both shuttle and lifeboat. The F117As one metre thick hull is dual layered, each layer consisting of thick layers of extremely complex ceramoplastics and heavyweight, self-healing, punishment absorbing materials, a hull that is electro-reactive. The weapons platform section carries 6 turreted cannons each (8 x kinetic ultra-bullet/laser) mounted top and bottom; each emplacement is controlled by a single gunner. It also carries 44 x half tonne, surface-mounted, HKA missiles, 4 defensive fighters and 6 kinetic pods firing 1 tonne kinetic projectiles (each pod carrying 20 projectiles). Finally, the weapons platform section also has 6 medium torpedo launchers firing 2-ton kinetics (forward-firing only). The additional hardpoints (disposable struts) allow the F117A to carry as many as 80 more missiles/bombs as well as several detachable mine units used to deter craft that might be chasing it. The F117A can only land on ships, ODPs and light gravity planets (less than ¼G), it is equipped with eight powerful thrusters and AESRA landing gear used to launch or land the craft. The F117A can also act in a pseudo aircraft carrier role using extensible docking nacelles to allow escorting fighters to dock for refuelling, rearming and pilot R&R. Piloting the craft is typically assigned to an AI and the human pilots' roles are mostly to assist and advise as well as to act as backup (should the AI be compromised). Manual human control typically requires both pilot and co-pilot acting in concert but doing so is generally regarded as a poor idea because the ship is extremely complicated in operational terms. The inside of the ship (inside its armour) measures 56 x 28 x 13 of which the internal crew space is around 40 x 12 x 7 metres. The crew area is split over two decks giving an effective space of over 900 square metres for the maximum "crew" of 18. The ship has a normal crew of 14, the pilot and co-pilot, 10 tech/gunners, a Captain and an AI. Unlike most fighters, the pilot and co-pilot have a relatively limited view and rely instead on information displays and the help of the onboard AI. Basic facilities include a larger galley, personal bunks, two toilets and a rest room; it is designed to support its crew and up to 4 additional staff (typically the escort pilots). The "command deck" refers to the two pilot stations and captain's chair towards the front of the craft with each pilot sitting forward and parallel to each other, the captain sitting behind. Weapons nacelles refer to the stations from which gunners control their turret and launch stand-off weapons. Information for each crew member is displayed to them on a mixture of holographic and organo-plastic displays. The craft's onboard computer (usually governed by the AI crew member) has voice/gesture activation & response (VGAR), friend & foe aware systems (FFS), fire/damage control & repair system (FDCR) and communications encrypt/decrypt (CED).