The MSS Python V2B is the predecessor to the sleeker, faster V2C & D that became the mainstay of the UCS fighter/bomber capability during the Abyssal Void War. Despite that around fifty of these ships were used successfully in the Escobar Raid and, with units sold to the UCS and Skean as well as maintenance contracts with the Pasha, Vishnu and Berserkers, were a commercial success for MSS. Nicknamed "Wasp" because of its weapons carrying capability the V2B is a fixed wing, space-capable fighter/bomber and known as the "Eel" to the Akatsu. 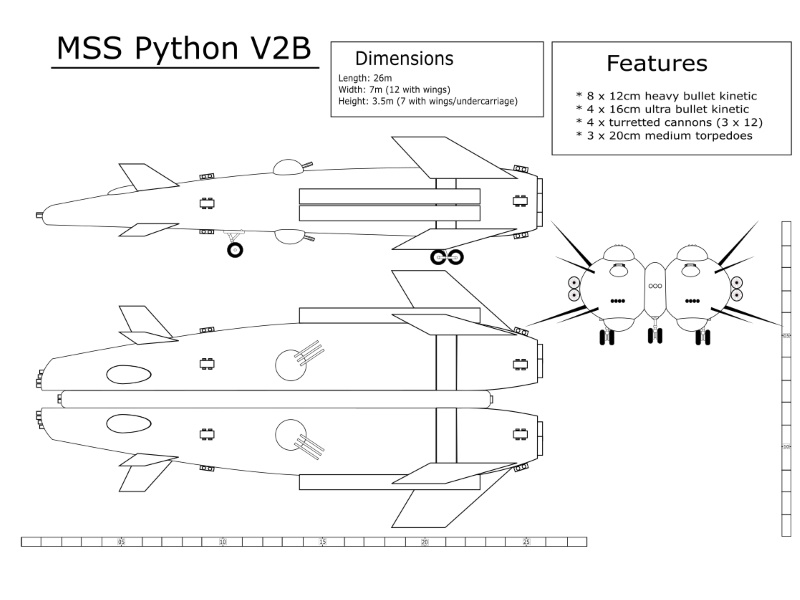 The V2B is 26 metres long, 7 metres high (inc. wings and gear) and 12 metres wide. The body of the craft is a slightly angular, "split-needle", design i.e. from front or rear would appear to be two distorted hexagons attached by a squarer middle section. The pilot sits in the left forward seat whilst the ship's captain sits in the right and her other two crew members sit in rear seats controlling the craft's defensive and offensive weaponry. The pilot and captain have good views through two large, segmented canopies and there are further curved viewports to the sides and rear as well as flat viewports top and bottom. The hull is constructed of a heavyweight layered metallo-ceramoplastics and, having no camouflage system built in, is painted matt black. The ship is equipped with both AESRA and wheeled landing gear. Towards her rear the V2B has large turrets mounted above and beneath the craft which provide as well as 8 heavy-bullet kinetics mounted around her front. She also has 4 x ultra-bullet kinetics, 2 mounted each side of the crafts hull as well as 3 x 20cm forward & rear firing kinetic torpedo launchers mounted in the central body. Each wing also provides 4 bomb & missile hardpoints each. The V2B carries 3 class 1 nuclear engines with each reactor powering two of the craft's 6 engines and can further mount 4 solid fuel disposable boosters. Each ship also features 16 thrusters in eight groups and her engines can push at nearly 25G, well within the tolerance of most Immersaline-based flight suits. Pilots control course and speed via the craft's guidance controls (in essence a sophisticated joystick, pedals and control panel combination) and the ship has a capable onboard computer which assists flight trim and compensates for factors outside of the pilot's control. The pilot can override the craft's safety features if needed. Interior facilities include a galley, shared bunks and toilet and the aircraft can support 4 crew for up to 30 hours but, outside of that, there are few creature comforts. The "command deck" refers to the pilot and captain's stations towards the front of the craft. Information is displayed to the crew on organo-plastic displays. The craft's onboard computer has voice activation & response (VAR), friend & foe aware systems (FFS) as well as fire/damage control & repair system (FDCR).