The V2C is affectionately known as "The Hornet" because of its weapons carrying capability and the V2D as "The Mosquito" because of its built in deployable wings (which the V2C needs fitted pre-mission) and variable thrust rockets which effectively allow it to hover almost like its namesake. The Akatsu call them "The Shark" and "The Hammerhead" because for their appearance and the because the V2D has a forward mounted weapons pod that is ditched once it is out of ammunition (though it still has uses since it has several basic thrusters and a small HKA charge capable of easily destroying a tank or other armoured vehicle. 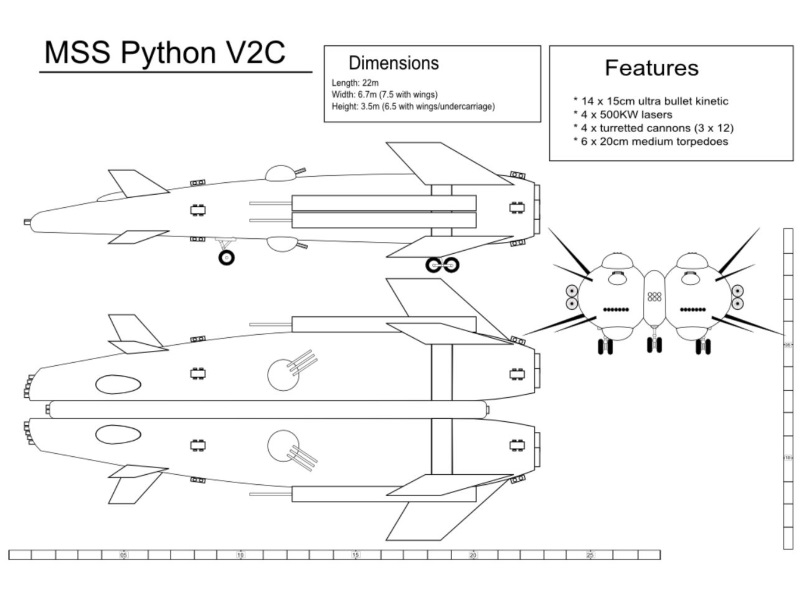 The V2C is 22 metres long, 3 metres high (5 including wings and gear) and 7 metres wide (11½ with wings deployed)... it needs to be configured pre-mission for atmospheric work. The V2D is slightly longer than the V2C at 22½ metres (23 with its forward weapons pod) and has larger multi-extendable 3-metre wings with the outer sections extending from within the inner ones. The body of both craft is a "split-needle" i.e. from front or rear would appear to be two distorted hemispheres attached by a shorter, slightly slimmer rounded square cross-section "bridge". On both variants, the pilot and co-pilot sit forward in seats in each needle half, with seating for two passengers to the rear of the crafts... on the V2D, there is an optional "seat" for an AI. The pilots have a good view through two large, seamless canopies and there are further curved viewports to the sides and rear as well as flat viewports top and bottom. The hull is an exceptionally lightweight layered ceramoplastic with basic self-healing but a good camouflage system and the ships are equipped with AESRA/wheeled landing gear. Both craft have standard defensive armament hardpoints including: Additional weapons hardpoints require the fitting of three aerodynamic stabilisers (known as "wings" though they do not confer flight capability) which provide 3 bomb & missile hardpoints each. Basic thrust and ship power are provided by two class 2 nuclear engines and both ship variants can carry two solid fuel disposable boosters. The V2D engines, unlike the V2C, are thrust vectoring which provides greater manoeuvrability and each ship has 32 thrusters in eight groups much like the Viper but (relative to ship mass) much less powerful. The eight engines can push the V2C/D at nearly 50G but, even wearing Immersaline flight suits, the maximum gravity the pilots can take is around 30G. Pilots control course and speed via the craft's guidance controls which make piloting the craft easier as the onboard computer makes all the required adjustments dictated by the pilot whilst ensuring its safety; pilots can override the safety features if they need to. Interior facilities include a galley, shared bunks and toilet and the aircraft can support 2 crew and 2 passengers for up to 48 hours, outside of that there are few creature comforts. The "command deck" refers to the two pilot stations towards the front of the craft with each pilot sitting parallel to each other. Information is displayed to the pilots on a mixture of holographic and organo-plastic displays. The craft's onboard computer has voice/gesture activation & response (VGAR), friend & foe aware systems (FFS), fire/damage control & repair system (FDCR) and communications encrypt/decrypt (CED).