The Viper III is the successor to the Viper II which was slower and less manoeuvrable but has now been withdrawn to home defence and convoy escort roles. The Viper III is used extensively by both UCS and Skean although the Skean primarily use the SolarFlare and Vindicator to fill similar roles. 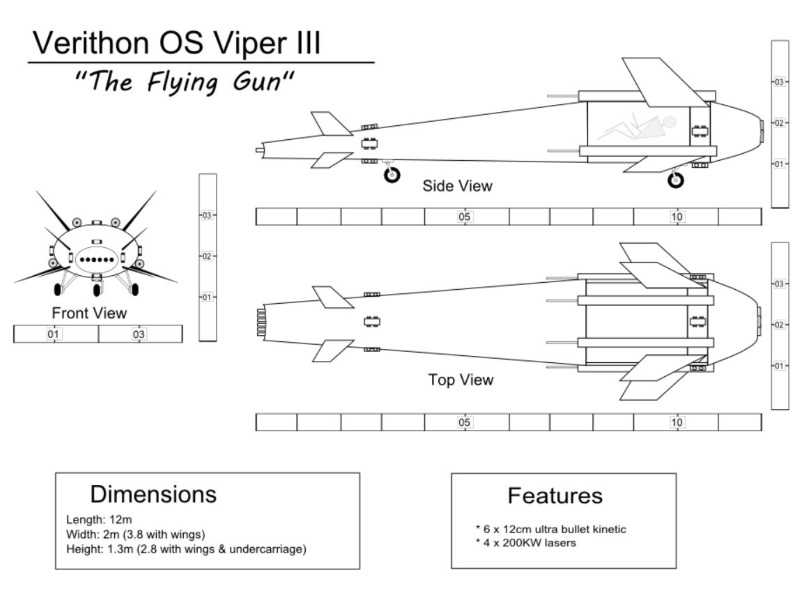 It is nicknamed Firefly because of the bright white flare from its unshielded engine and its high manoeuvrability. It has thrust vectoring engines that, in conjunction with its powerful manoeuvring thrusters, allow it to hover and perform complex acrobatics in an atmosphere. The Akatsu call it The Catfish and, although it is not particularly powerful against ground armour units, it is capable of fast runs across lightly armoured targets that can cause significant damage. The Viper III's basic hull is an elongated oblate, pointed barrel shape (a flattened needle) 1½ metres high (2¾m including wings), 2¼ metres wide (3¾m) and twelve metres in length with the single crew person lying on his or her back almost horizontal in a reclined seat. Both seat and suit are Immersaline specials which allow the pilot to manoeuvre rapidly at speeds up to 30G (the ship itself is capable of nearly 60G). The pilot has no direct outside view relying on indirect sensors and full 360-degree screens inside with the pilot's chair able to spin to allow them to see any of the screens (effectively in almost any direction). Pilot orientation also means that the pilots would normally be sealed into their ships by ground technicians and that maximum exposure is short, typically 3 to 4 hours and at most 12. The ship is powered by a single class 1 nuclear engine mounted close behind the pilot's "cabin", one of the reasons that pilot exposure needs to be minimised. In addition, protecting against high g-forces the pilot's suit takes care of all normal bodily functions and there are few additional interior facilities. Manual pilot control is by the standard dual joystick, dual pedal system but, in addition, the small craft has a sophisticated voice recognition and control system. The Viper III's hull is self-healing but relatively lightweight and carries a total of 32 manoeuvring thrusters in 8 groups. Standard armaments include: The fighter has a powerful SAR beacon, good targeting radar and communication facilities, excellent security and fire control in addition to the chameleon-like abilities of its hull. The ships landing gear is wheeled but retractable for use in flight and launch on a full AESRA launch track. In addition to voice activation and control the Viper, like most recent UCS fighters, has excellent friend and foe recognition as well as a sophisticated gunnery fire control system. The fighter is unofficially nicknamed "The Flying Gun".