Perhaps my title is a little unkind but it is how I described the books to my wife so it seems as good a title as any. 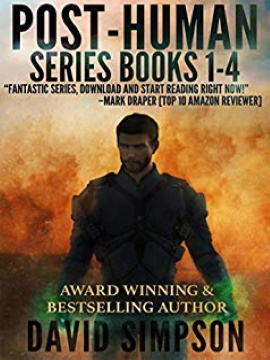 I borrowed this set of books from the kindle lending library and while I quite enjoyed the first one, I started to find the characters of the second one grating on me and I wasn't sure why. As I started in on the third, I began to realise what was bugging me. Simpson's main characters seem too simplistic and lack depth; too black and white, the primary characters being too good or bad; and the stories feeling almost as if they are written for a young teen audience. In some ways the books remind me of older science fiction and fantasy, authors like E. E. "Doc" Smith, Edgar Rice Burroughs, L. Ron Hubbard, Andre Norton and Jack Vance only they don't read anywhere near as well. Don't get me wrong, for the price they were a reasonable deal but as one reviewer wrote it feels like a written version of a comic strip and good books, in my opinion, should be more than that. Ultimately, I did finish the books (to see where they went) but I remained largely unimpressed.