I borrowed this series books for a while and managed to get as far as "Conquest" (Book 4) and at that point decided I was done. 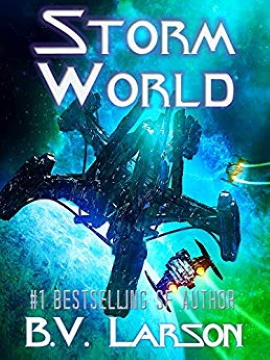 To summarise the series (so far) is centred around a man called Kyle Riggs. Riggs discovers advanced alien technology and uses it to defend Earth against AI aliens known as Macros. By this time, four books in, I feel I've now got the gist of the series, with each tale having Riggs discover Macros (once again) up to their logically deceitful tricks and come up with ways of defending against the dastardly creatures so saving the day, the Earth and so on. An author will usually have a given style and a series perhaps more so and I have few doubts that my own series, when they are all published, will be an exception. However, in addition to writing, I am an enthusiastic reader and, this far through the series, I find myself getting somewhat bored; I want something other than Macros and it doesn't look like I'll get it. That said, I've largely enjoyed the books so far; they are competently written with few spelling mistakes or grammatical errors and I quite like the hero and his band of merry fighters. My problem is that I got halfway through this book by which time I was thinking, "Oh No! More Macros!" (hence the title) while wondering if I could be truly bothered to plough through more of their cold machinations as Riggs' continued his attempts to stop them. As implied above, it's obvious to me that Mr Larson can write and write well; he has written another series, "Undying Mercenaries" series which is, so far ("Strom World", book 10), absolutely superb however I was just finding each tale in the "Star Force" series to be a little too similar to the preceding one and I finally realised that enough was enough. Naturally, as a geek and science fiction enthusiast, I reserve the right to change my mind and can only apologise to the author if he subsequently does what I want; it's happened before and the author certainly knows how to weave an entertaining yarn. I just got so damned bored with those machines and sadly, began to have some sympathy with other reviewers who suggested they were just hoping the Macros would finish us off.

Tell the readers a story! Because without a story, you are merely using words to prove you can string them together in logical sentences.