Some eight hundred years in our future a war is brewing between the Confederacy and the First World Alliance. The Alliance sends Captain Alexander de Leon to explore an Earth-type planet but a power struggle results that will determine the fate of the entire human race. So begins Jasper T Scott's "New Frontiers" series with the first book, "Excelsior". 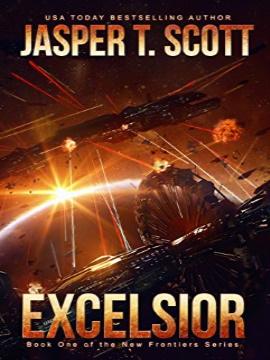 Outside of my broad issues about setting military science fiction stories in an Earth-Under-Threat scenario, I have other issues (I always do). I have never really liked books where characters are referred to by their Christian names and particularly in books where there is gender bias in the naming. That wasn't specifically the case in Scott's book but I found it particularly jarring because everyone outside the primary characters were referred to by surname, for Alexander de Leon (the book's hero); I got around that by reading his first name as his surname but it still jarred with his wife who was referred to as Caty. In short, I felt name references were inconsistent but that it was obviously an artistic choice on the part of the author. I wasn't entirely sold on the way the last few chapters wound down and personally would have preferred the book to end a chapter or so early. Despite the above, I enjoyed most of the book and would certainly consider buying more of Mr Scott's books. At the end of the book, there is a chapter from the sequel, "Mindscape" where it feels like the author is setting up the book for something similar to the first book. I'm not convinced that's a good idea and, although I know multi-book stories are the way these days, I would have preferred an entirely different story or one set somewhere else in the same universe. Despite some negatives, I enjoyed the book (as evidenced by the fact that I wanted to keep reading it) but I felt that the twist in the story effectively stole from me part of what I was enjoying.

It can only be attributable to human error.