Thea Sharrock directs JoJo Moyes novel (writer and script writer), "Me Before You" with style, flair and humour. 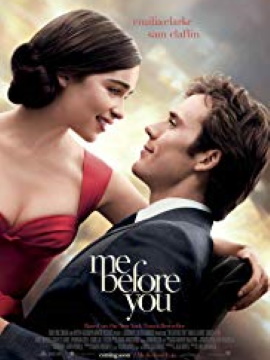 I saw this at the cinema and was bought it as a present the following Christmas. The story concerns a young shop girl, Lou Clark (Emelia Clarke), who loses her job in a café but then is given the chance to become a carer for a once very active young man, Will Traynor (Sam Claflin), who is now quadriplegic. While I can't say the film is brilliant or even the acting, Emilia Clarke is entrancing as she plays the role of the ditzy Lou, a young woman who has the weirdest taste in clothes; the film pushes all the right buttons. Sam Claflin plays the role of the quadriplegic quite brilliant especially when you begin to understand that things don't always turn out alright. My mother asked about films like it so I bought it for her and she loved it too. In terms of romantic films (rom coms or more conventional romances) this film easily makes my top five; I doubt any film will ever beat "The Holiday" or "While You Were Sleeping". If you're one of those who sneer at Rom Coms, you'll hate this but if, like me, you take films for what they are, you'll probably like it!

So few want to be rebels anymore. And out of those few, most, like myself, scare easily.