I've now read the entire "World War" and "Colonisation" series and the truth is I wish I hadn't. 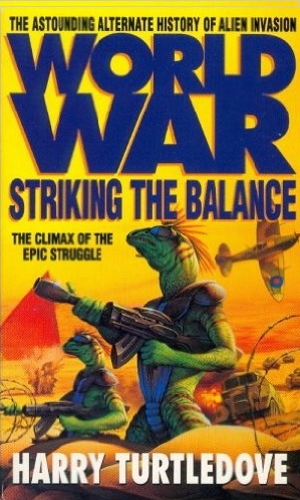 It's not that Turtledove isn't able to write characters well, for the most part, he can (something, as a wannabe author, I rather envy), it's just that so many of the storylines end up being pretty much irrelevant. I started reading the series with a friend, a kind of mini-book club, and through most of the "World War" quadrilogy, we were entertained enough. Admittedly, by the end, we were beginning to flag and wonder if the stories were actually going anywhere especially when the series didn't end so much as simply stop. Apparently, they weren't except, of course, for their seemingly inevitable course towards the "Colonisation" trilogy and, as my friend was fond of saying, exciting things did seem to happen in the books but they always seemed to happen somewhere you (the reader) weren't. That didn't seem to be so true in the first couple of books. On the assumption that the "Colonisation" trilogy would pull the disparate stories together, make sense and bring us to a conclusion that would make reading the first series truly worthwhile we embarked on the first of the series. Set twenty years later, the alien colonisation fleet has arrived. Some of my favourite human characters are dead and some of the least entertaining remained and by the end of the first book, my worst fears seemed to be justified ... little, if anything, was going to be explained; some new, some old individual character stories were simply going to plod on and I had serious doubts anything would ever end. My friend gave up but I stuck it out, through sheer bloody-mindedness I suppose. I really wish I hadn't as, seemingly true to form the story didn't end, simply stopped. In his defence, these are the only Turtledove books I have read so it is entirely possible that other ones are exempt from this criticism. I don't get it ... maybe this is more in line with what real life is like but the simple fact is this isn't real life, it's a fictional alternate history and it should be obvious to the author that the last thing I want is a reality much like the one I experience daily. When I follow a series though, especially a seven book one, I want to be entertained, I want questions to be raised and by the end of the books, certainly by the end of the series, I want those questions answered and, in this series, Turtledove fails to do so. I now know there is another book set in the same universe, "Homeward Bound" again taking a further leap forward but right now I'm struggling to think of a reason to read it ... not only do I strongly suspect it won't answer the questions the author (often intriguingly) raised, based on the 7 (of 15) 1 star reviews on Amazon it looks suspiciously like it actually won't. 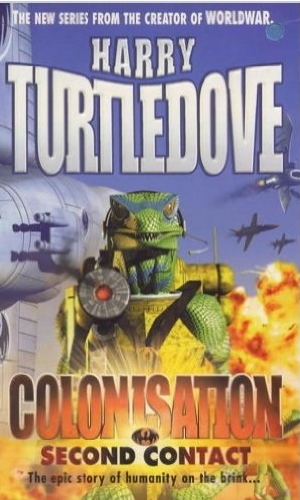 There's one other thing about the entire series I have to mention and that's Turtledove's use of chapters ... books have chapters, I know that. A chapter, to me at least, deals with a distinct subject (a character, a theme, an event or some such) and advances the plot forward by doing so. There were 20 chapters in every novel of the series, each chapter was chronologically linear in relation to the others and seemed to have between 4 & 10 continuations of stories of characters we'd already met (or were being introduced) but none of them seemed to have any rhyme or reason by which I mean a reason for being separated into that chapter. The other thing about his chapters in the "Colonisation" series (it wasn't quite as bad in the earlier quadrilogy) was the length ... I read mine on a Kindle and you could be sure that when you started the next chapter you were an additional 5% of the way further through. That isn't exactly a criticism but it is kinda weird & frustrating. So yeah, Turtledove's chaptering was weird and several times I had to ask myself the question why he even bothered with them as their structure seemed to reflect little more than an attempt to conveniently break the novels up into chunks. That I stuck the series out is a wonder and obviously, that means I must have found something interesting in them. That inclines me towards an average personal score, however, the way the novels all ended, simply stopped to my way of thinking, is unacceptable as a form of story writing and I am struggling to figure out if this series worth any marks at all. It's boring and frustrating for the reader and I hope that reviews like mine will make the author (and other authors) realise that we readers are entirely willing to accept a universe that an author builds and, for science fiction, suspend our sense of reality to step into that universe. But when we do we want that universe to make sense, to be internally consistent, if questions are raised we want them answered, and the last thing we're after is a pale reflection of our own lives. We want the pace kept high and we want the novel or series brought to an actual conclusion, one that doesn't invalidate all the time, effort and money we've invested in ploughing through your work. For the sake of whatever god you believe in, entertain us, please!
Thanks for reading. James C. Rocks, Author ("The Abyssal Void" Trilogy)

Where there's smoke there's fire. If you ignore it, you get burned.