"The universe we observe," writes Dawkins, "has precisely the properties we should expect if there is, at bottom, no design, no purpose, no evil and no good, nothing but blind pitiless indifference." He is right. 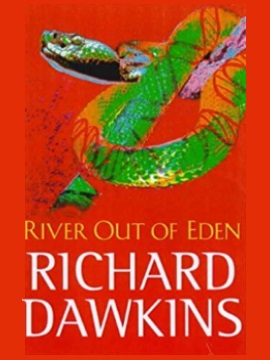 The theory of evolution, as ever considered contentious by those of extreme religious bent, is defended (or rather celebrated) by the scientist charged with the UK public's understanding of science, Professor Richard Dawkins, and is done so in a fashion that is both brilliantly incisive yet in a way that is easy to understand. In "River Out Of Eden" Dawkins (dubbed "The Great Reductionist" by some) further promotes the concept of the selfish gene by concentrating his argument on the DNA of those cellular powerhouses, mitochondria. As ever a proponent of gradual change, sadly his great American foil Stephen J. Gould died earlier this year, Dawkins likens evolution to an immensely long flowing river of genes only not those genes we would normally consider. Dawkins does not, as creationists (or "Intelligent Design Theorists" as they like to be called nowadays) often demand of evolutionists, deal with the problem of where life arose for that (as any moderately intelligent person will realise) does not lie within the sphere of evolution but instead eloquently describes the way in which mitochondrial DNA can be used to track back through our female ancestors to an individual he dubs "Mitochondrial Eve" (an individual who has as little to do with Christian mythology as particle physics has to do with the equally mythical Ark), the ancestor of all human life on the planet. In doing so he likens us to vehicles, almost irrelevant automatons, our only purpose to propagate the genes within us and ensure their success within future generations. Split into 5 chapters Dawkins goes systematically about demonstrating his (& Darwin's) critics, usually theistic sceptics (if such a thing is possible), to be wrong and, using metaphor & analogy, lays the complexities of life out in front of us in a rational fashion. He applies the knowledge of current and previous biologists to the underlying principles behind life and does so, despite the seemingly religious title, in a way that is not in the slightest. In doing so he manages to compress into a relatively short book a huge slice of human history, never too detailed to confuse but somehow managing to leave everything explained in a fashion few other science writers can manage. Dawkins highlights the fact that the various human behavioural & physical characteristics didn't arrive at once nor in a finished form, perhaps organs had some other function as they developed before they came to fulfil their current one. By presenting the analogy of evolution as a river connecting all species through a presumed single common ancestor Dawkins draws a picture in the reader's mind of exactly what evolution actually means and, possibly more importantly, what it does not mean, dispelling many myths & misconceptions. To some this book may seem more than a little unsettling but should, if they read it with an open & objective mind, leave them with a sense of awe & wonder, will allow them to look at the stars, at chemistry, at physics, at biology and shiver with the thrill of what we might learn next. Science does that ... it allows us to understand our past, prepares us for our future and holds the key that may unlock our potential in a mind-bogglingly vast universe that apparently cares not a whit about us. To sum up, "River Out Of Eden" is a thought-provoking and interesting read for those who want to know more about our evolutionary past, it is illustrated with simple ideas, simple ideas presented in a beautiful style, presented with wit, insight, force and clarity. At its best it is clear, logical, lucid & presented in an entertaining fashion ... at its worst (and I stress this is not a major criticism) it tends to shy a little too far away from hard science for my liking. This is a book for those who have difficulty in visualising evolution and despite my relatively minor criticism above it was so fascinating that I have gone on to buy more of Dawkins books. Once I had read it and had decided to write a review I first looked around at major online book vendors and it was interesting to read some of the reviews. Many were positive, a few were relatively neutral but on Amazon US, in particular, there were many appalling, deeply ignorant criticisms apparently from those of a Judeo-Christian background ... as an atheist & an ex-Catholic, I suppose I should feel little surprise at this. However in the book Dawkins lists the major biological contentions of the creationists and destroys them with ease ... from one point of view (notably mine as a militant atheist, something Dawkins has also been described as) the book further increases the arsenal science and its representatives have in the "debate" of creation vs. evolution. As one reviewer put it, "in 'River Out Of Eden' Dawkins (with thorough knowledge and captivating style) illuminates how life has achieved what to the uneducated or bigoted appear to be miracles'. Nature, reviewing this book, said "it abounds with metaphors that make things brilliantly clear, an excellent introduction to many important evolutionary ideas" as a relatively unqualified defender of science and opponent of religious fundamentalism I can only agree.
Thanks for reading. James C. Rocks, Author ("The Abyssal Void" Trilogy)

It is perfectly okay to write garbage, as long as you edit brilliantly.