In part one of this series, I discussed language, that is to say, the need you should have, as an author, to be as good as you possibly can be at the language you choose to write in. 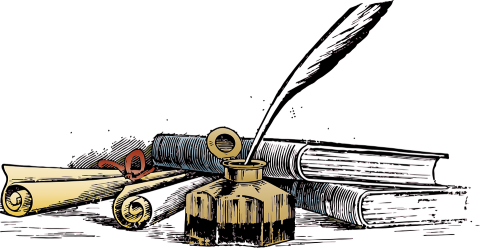 The second thing you need, not so much a skill as a requirement, is a story and that is not necessarily as simple as it sounds. You first have to gain your basic idea, your inspiration, from somewhere. That can simply happen as it did when I went to a concert with my daughter and other times it's something you purposefully develop but, even then, you need an idea to start it off. Inspiration comes from all over, from family, from friends, from colleagues, from strangers, snippets of conversation heard in a shop or a café, imagined conversations of two people leaning just that little bit too close together. In short, inspiration is everywhere should you choose to see it. Like any other writer (aspiring in my case) I use that stuff too but I plan to write science fiction so much of my inspiration comes from the same sources cited in part one; books, television, movies and so on. The primary inspiration for my soon-to-be first novel came about as I was reading some alternate histories primarily Eric Flint's, "1632" series and, after reading some positive reviews, Harry Turtledove's, "World War" and "Colonisation" series. Flint's series was excellent but the reviews of Turtledove's books failed to match my own experience on an epic scale, they were terrible (I review them here). I had also been reading the "Lost Fleet" series by Jack Campbell which, whilst not the best I'd ever read, had some good qualities. Like one of my favourite authors of all time, E. E. "Doc" Smith, Campbell was able to describe the manoeuvring of fleets in large space battles in what I considered to be a believable fashion. By combining the concepts of alternate history and future space warfare the idea for the novel I am now writing trying to write was born. How did I get to the idea of writing a novel from reading the books of others? In part, I think it was because I was so damned annoyed at Harry Turtledove, something you'll see in my review. I had read through seven volumes of his work and, despite some good characterisation, found the way he wrote, the way he failed to finish story lines, not just frustrating but infuriating. Of course, I didn't know if I could actually write better but what I could do was imagine it written better ... much, much better! Imagination is critical for an author and, arguably, more so in the fantasy and science-fiction genres. People get many things from books, entertainment and education to name two but to me, it is clear that every fiction book ever written describes a situation that is unusual, that is not normal or rather beyond normal. With the glimmer of an idea in my head, my closest friend already some way through his first novel and a number of other pressures pushing me towards something creative, I finally reached the point at which I decided it was time to try and that was when "The Abyssal Void War" project properly began. In my next blog post, I'll deal with the third requirement, faith.
Thanks for reading. James C. Rocks, Author ("The Abyssal Void" Trilogy)

I don't believe in astrology; I'm a Sagittarius and we're skeptical.