To put it simply this is this most incredible popular science book I have ever read ... if you were ever in doubt about how nature, evolution, can create the staggering variety it has this book will explain how it happened or how it might have come about. 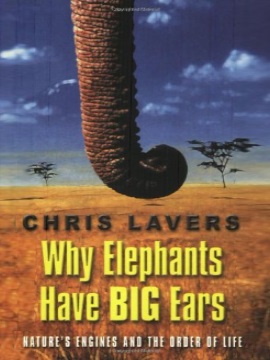 Were dinosaurs warm-blooded or cold? Why should we regard King Kong and Godzilla as laughable rather than scary? Why did the marsupials keep control of Australia? Why are insects so small? I've known for a long time that evolution overlaps just about every other scientific discipline and I've seen documentaries of how scientists (both research and police forensic) can reconstruct a face or body from a few fragments of bone and comparative biology (it doesn't, by the way, mention this ... I worked that out for myself). This book, however, gives a clearer idea how and it does much of it by treating animals (& humans) as if they are mechanical which of course, fundamentally, they are. For years I have watched in amazement as science uncovers the natural world around us, wondered about the techniques, the methodologies and what we will discover next ... Lavers, in this brilliant book, bring that far more sharply into focus. In order to do so, the author approaches the subject from a sharply different angle than any other author I've ever read and does so with an open-mindedness that is almost child-like. Yet he tempers the arguments with personal knowledge, significant amounts of research and a very obviously keen insight. In Chapter 1 Lavers starts off with the cinematic movie icons Godzilla & Kong and moves on rapidly to discuss dinosaurs, moves through the possibility of giant antelopes and only towards the end returns to the subject of the cinema (and indeed why elephant's ears are big). This first chapter is, in my opinion, the finest in the book though it may be that that has more to do my meeting the author's unique style & refreshing approach for the first time than for any other reason. In subsequent chapters Lavers deals with differences in various internal metabolic systems, why dinosaurs were almost certainly warm blooded, life in extreme environments (there are no reptiles in the extreme cold regions of Earth), why lizards (except in relatively rare cases, Australia being one of them) failed to dominate, differences in rivers to land, animals in flight and ends on a warning about our appalling treatment of our world. One of the most interesting aspects of the book is Lavers' obvious fascination with crocodiles (and reptilian life in general) and that he considers them, in ecological terms, the ultimate form of life on Earth and concludes that it is not necessarily better to be warm-blooded. This brings me neatly to the essence of the book which concerns the differences between cold and warm-blooded animal types and ensures that the reader understands it; understands why warm-bloodedness came to be, how it came apparently to triumph and why, in broad terms, it didn't. This is of utmost importance, we warmbloods "own" the large-scale world but if we are so superior then we would own the small-scale world, the world of all that skitters and crawls, as well ... nature stands in testimony to the fact that we don't and probably never will. Lavers not only scours the traditional biologist fields of anatomy, physiology, ecology and palaeontology to find answers but also wraps in the mechanical to answer question of a global-scale and, in doing so, he fundamentally changed my view of life on Earth to one that finally demonstrates that there is no superior life type, that every lifeform is only superior within its given niche and, in doing so, reveals some impressive methods by life deals with some of the world's most inhospitable climes. "Why Elephants Have Big Ears" is as fascinating as it is superbly written, the author discusses issues that I hadn't thought of, makes me feel like I wanted to know them all along (and of course I did) and then gives me a vastly clearer view of what the answer almost certainly might be (yes that last was deliberate ... that's science). Though the book is of the popular science variety, written in a non-technical style it is nevertheless aimed at the educated non-specialist and has no hint of "dumbing down" ... in this sense it is an absolute "must-read" for anyone with an interest in the theory of evolution or, indeed, the natural world & science. To quote Nancy Bent of "Booklist", "The patterns of animal life on the planet can be explained by understanding how their size and physiology interconnect, and then by how size and physiology relate to where an animal lives." The elephant's ears, by the way, are heat radiators and although many will be saying "of course, of course" it isn't immediately obvious why... Chris Lavers explains why they are.
Thanks for reading. James C. Rocks, Author ("The Abyssal Void" Trilogy)

Love is that condition in which the happiness of another person is essential to your own.

Robert A Heinlein (Stranger in a Strange Land)