"Tales of the High Avenging Angel: #1-3" is an omnibus of three tales by science fiction and space opera author, Dietmar Arthur Wehr. The stories are, in order, "The Tattooed Angel", "Angelfire" and "Nirvana’s Angel". 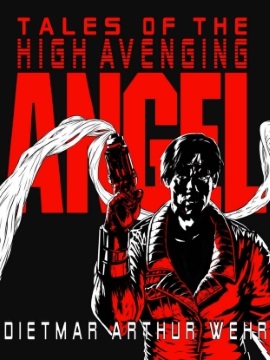 The star of the series is a former star pilot called Hoch Racheengel, whose name translates literally to "High Avenging Angel". The Amazon intro text says of the stories that they are "dark and gritty Space Noir stories are intended for adult readers only". In many ways, moving into the "space noir" genre is a brave attempt by the author to be original but it is only partially successful. I bought all three books for 99p and, yes, they were worth that but not much more. Why is more complicated because, whilst the "Space Noir" is a refreshing change it is not fully realised. "space noir" appears to be is based on the idea of "film noir", an older form of cinema, often black & white as well as regarded as both stylish and cynical. The stories, as these do usually involve some kind of crime and the central figure is something of a loner often acting as an investigator or detective. It is also worth noting that there is often a high level of sexual motivation in such tales. First of all, a brief overview of the book.

There is a fair degree of action and violence in the book, not only of space battles but more personal stuff. Most of the violence seems to concern the impact of munitions with rather less well armoured human beings. The stories range across several systems, most seeming much the same except when our lead character visits Earth. I found the first story quite entertaining but the subsequent ones lost their shine as it became apparent that they all followed the same basic outline. In addition, there was the problem that the author tended to resort to convenient high-tech devices to solve his main character's issues which in turn led to a lack of believability and suspense. Each of the stories has clear romantic influences and at least one has a strong sex scene which, in general terms, are well handled. The most annoying thing I find about a lot of the books I read is spelling and grammar; clearly, Mr Wehr is quite capable of writing and it was with some pleasure that I noted no particular grammar or spelling mistakes. Moreover, he paints a vivid, if predictable, picture of his characters and their surroundings. On a personal level, I found the book readable but, since all three tales are essentially identical, predictable earning it a lower score than it probably deserved so yes, depending on your tolerance of such things, worth the 99p but not really much more. It's a shame the stories couldn't have been a bit more adventurous, a bit more detailed, a bit more interesting ... it was definitely a good try, it just failed to meet its potential.
Thanks for reading. James C. Rocks, Author ("The Abyssal Void" Trilogy)