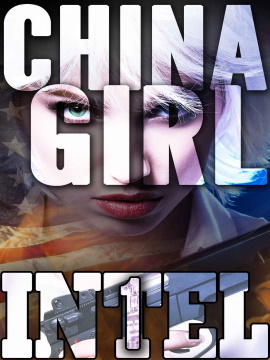 I have only read one of Erec Stebbins books before, "The Ragnarok Conspiracy" (originally published in 2012), the first in the "Intel 1" series which I got as a four-book bundle on a free offer. I left a review because I loved the book but worried about reading further because, you know, sequels 'n all that. Recently Dr Stebbins (perhaps I should say Dr since he has a PhD) contacted me and offered me a copy of his latest book ("China Girl"), the sixth of the "Intel 1" series, if I would be willing to read it and leave an honest review. I pointed out my experience and concerns with his books so he also gave me book five of the series ("Androcide") and I review the two in combination here. Neither "Androcide" or "China Girl" can be considered entirely original in concept and, by that, I merely acknowledge that, in creating the "Intel 1" universe and continuing to write within it, any sequel cannot be truly original. Other authors, myself included, do much the same thing though I have to concede that Dr Stebbins does it quite well. Set in both Iran and the US, the latter being the focus, "Androcide" is the fifth book in the "Intel 1" series and deals primarily with a series of brutal murders of men against the political background of a nation sliding right on a tide of popular fascism. The sixth book, "China Girl", continues that story, bringing those background themes to the fore and, set purely in the US (although there are several foreign influences), allows us to see the nightmare of the newly elected President Suite and his rogue fascist administration.

I very much enjoyed both books, which my positive scoring reflects and, with hindsight and Dr Stebbins tightly written plots, I now know I shouldn't have worried about his other books. "Androcide" involves a man on a mission to murder on an utterly massive scale. The story starts simply enough with a rapist who has served his time, being caught, murdered and left almost artistically presented with his genitalia removed. The primary investigator, Tyrell Sacker, tries to fend off Grace Gone, a private investigator before finally realising her brilliance and his need of her; the author makes amusing plays on the PI's name with chapters involving her and continues that through the following book. In a parallel story set in Iran, "Intel 1", a shadowy secret organisation whose headquarters are deep under Manhattan, is investigating other dark terrorist organisations. More men get killed (the clue is in the book's name) and a pattern emerges which ultimately gives them information relating to the biomedical terrorist's identity and reveals links to their current investigation and other events transpiring around them. Based on what I've read so far, the author's work tends to involve a fair amount of violence, quite a lot of action and a degree of suspense.

"Androcide's" story continues in the sixth book, "China Girl" and what makes that one both unique and terrifying is the background vision of an America gone completely and believably off the rails. Daniel Suite, a candidate for the US Presidency, is a nightmare version of Trump and, trust me, if the real Trump concerns you, he is nothing on this Suite character. I found the author's writing addictive, as evidenced by the fact that I immediately went on to read the sixth book, where Daniel Suite has won the US presidency. By this point, I was beginning to believe that Dr Stebbins mission was to scare the hell out of me by which I mean me personally. The author clearly pays attention to events playing out in our everyday lives because I see echoes of it both in the US and in the UK where I live. "Androcide" had no apparent errors either in writing style or in the author's understanding of science. However, the latter should hardly surprise me given the fact that he has a PhD in biomedical science. It is always a pleasure when an author presents us with a story that is not only good but has excellent grammar and spelling still there were occasions when the author's use of language pleasantly surprised me. "China Girl" was much the same where, outside of a couple of typos ("Christina" instead of "Christian" for example), I was unable to find many grammatical errors. I can't say I particularly liked his use of the word "pled" (the past participle of "plead") which jarred on me though that's a seriously minor quibble. In "China Girl" we get to see the real nightmare of a now elected President Suite. Daniel Suite is a Trump-like president taken to an extreme that I don't think Donald Trump is capable of; at least I... don't... think... so... "China Girl" is a nightmare look into the future of modern politics, the future of the US, in the post-truth era. The story, more so than the previous novel, is politically charged with the new, far-right President, fostering the seemingly popular aim of driving Mexicans and Muslims out of the country. In the story, some people of colour appear to support him but there is a clear suggestion, an undercurrent, that they may one day be in much the same position. Though it's easy to read both books as standalone novels, the stories Stebbins offers us are continuations of some of the themes offered in earlier books, ideas that reflect many of the happenings in today's society and all the scarier for it. It is engaging enough to be immersive though not so complicated as to lose the reader completely. There is a lot of action and violence in the book from rebels attempting to stop Suite's fascist programs. Although there are emotional entanglements in the first book, hints of romance between several of the characters, there is a sex scene in "China Girl" which the author handled competently. Competent or not, I'll be honest and say, I wish he hadn't as I've yet to see any sex scenes in books that, in my not-so-humble-opinion, are handled that well. What I did like, however, were some of Stebbins' turns of phrase for example, when two of our heroes meet the Trump-like character, Suite: "Inside, Daniel Suite beamed at them, jovial like the clown in It sheathed in a business suit. His unnerving smile swam in a sea of spray-on tan. His smirking eyes two pink holes in an orange face" I have read Stephen King's "It" and Stebbins' reference to It (sic) brought a beaming smile to my face; just beautiful. In conclusion, it's worth noting that I generally read science fiction and Dr Stebbins has, it turns out, also written some which I plan to get around to reading and reviewing later. In the "Intel 1" series of books, what I would call a series of techno-thrillers, the author writes exceptionally and quickly engaged me in his writing. As I said at the beginning of this review, I had only read one of Dr Stebbins books before due to my concern that his stories would screw what were by then much-loved characters over. However, it wasn't long before his writing had me utterly absorbed; I enjoyed both books, especially the climactic endings; though I had guessed some aspects the endings still surprised me. More than that, the stories are believable; one only has to look at the current states of both America and Britain to see echoes of the attitudes Stebbins visualises in his books. Other reviewers have said that reading the "Intel 1" books as a series is preferred and that's probably true, but I read the first book, then the fifth and finally the sixth enjoying them all and finding them almost entirely self-contained. As long as Dr Stebbins doesn't try to advance ridiculous personal views through his characters as one author I once loved did (and his writing hints that he won't), I will continue to read and probably review his writing. Clearly it depends on your preferred genre but, to my mind, Dr Stebbins has written a series of books that are powerful, passionate, tense and politically charged that, as he says himself, while extreme, are hardly a stretch for America. That an author can say that of his own nation is scarier and that I can identify such trends in both the US and UK is scarier still.

They call me Mister Tibbs!