War is a four-dimensional strategy game similar to chess. It is a two-player game, with someone playing either another person or the computer and is played in a hologrammatic "arena" (the play area). There are several variants but the "War Game Society" defines the game as being based in a one-metre diameter spherical arena each with around four thousand distinct locations. The official game has one hundred and three pieces per player: 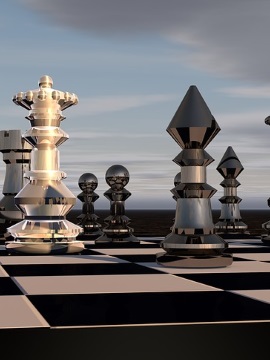 In addition, the official rules allow for 10 Conscripts which can be promoted to fill varied roles depending on a player's needs. The aim of the game is to capture the flag (the Standard Bearer) and all pieces are visible except the conscripts or pieces moved off the board which exist in "the fourth dimension" and are only visible to the owning player. Pieces can only be moved to and from "the fourth dimension" one piece per turn but otherwise, a player can move any number of pieces in a turn but is limited by time. Time limits vary by agreement with the standard rules stating five minutes but once the player commits a piece they have only one minute to complete their turn. The game starts with all pieces except the Conscripts arranged according to a player's wishes within their thousand place home territory and they cannot see the other player's pieces until play formally starts. The best plays are likened to high art.