Science fiction, even in the twenty-eighth century, still portrayed asteroid belts as collections of tumbling rocks with spaceships zooming in amongst them and usually culminating in some poor bastard's demise as they slammed into one. Travellers through an "asteroid packed" system might, on exceptionally rare occasion, see a large asteroid but navigational charts were updated daily, ship computers plotted courses to avoid danger and the rest was handled by automated ship systems. The latest anti-meteor systems, ultra-fast computers linked to state of the art detectors, could predict the paths of known asteroids and detect "medium" sized objects and avoid them. However, little could be done about the "smaller" meteoroids, little but rely on the ship's anti-meteor shielding. 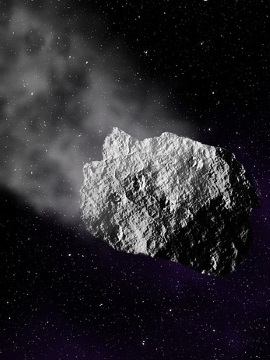 All but the slowest ships were equipped with anti-meteor shielding, a technological development stemming from electromagnetic military vehicle armour. Properly configured, AMS produced an oblately spherical electromagnetic envelope around a ship that protected it in line with the ship's motion. It couldn't protect against larger objects or human-made missiles or shells but, extending forward several kilometres, it would guide micrometeoric particles to the sides of a ship's path. Those meteors that the electromagnetics couldn't handle were dealt with by the small, powerful shield lasers which, acting as a kind of pressor system, again guided the small rocks to the sides of the ship. Of course, most of the smaller asteroids had been swept away. Although near undetectable, the pull of their larger brethren over time had done its job and even low gravity ultimately forced the majority of rocks to clump. That still left billions of meteoroids in the system, uncharted dust and rocks ranging up to ten metres in diameter, mostly sparsely distributed but still a possible danger.

I find your lack of faith disturbing.