Terraforming is the process of environmentally engineering a planet or moon so that it is better suited to human habitation (more terra-like) but the process is time consuming even assuming a viable candidate is identified. There are some three hundred habitable worlds across The Extent but considerable more non-habitable, most worlds being resource worlds (mining or military) few deemed worthy of a name. Terraforming is split into 4 main phases: Candidate selection, Establishment, Terraforming and Colonisation. Once a planet is stabilised the majority of the terraformers drop into a hibernating state but in some cases, the terraforming effect needs to be maintained and the terraformers remain active to ensure the planet remains habitable. 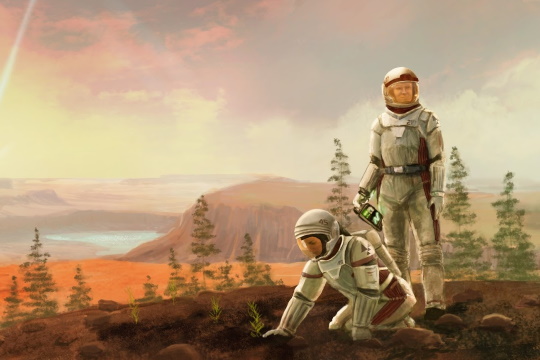 Phase 1: Candidate Selection
Early colonisation was on "Earth-like" worlds within the following basic range limits: The process of establishing whether a planet is viable in terraforming terms is complex but the major factors are as follows:
Phase 2: Establishment
Some candidates are selected despite the fact that they don't pass all the basic criteria for terraforming i.e. the possibility of gross environmental alteration is considered. Establishment is the idea of establishing or forcing a planet into a viable state by supplying it with the required elements; the aim is to force the world to a minimum of a "Precambrian" state. This is usually rejected for financial, environmental and time reasons (it can lengthen the terraforming process from around fifty to a hundred years or more) unless a clear benefit is demonstrated. In the four cases, "Establishment" so far carried out two worlds are now colonised, one is in phase three and the last has yet to settle sufficiently for phase three to begin. Establishment is a way of bringing a candidate closer to the "Precambrian" state and, whilst it may be technically feasible, it is not considered realistic to change an airless planet to one with air. The major methods of "establishment" are: Massively cooling a planet is more problematic and has yet to be attempted but a number of leading scientists have advanced ideas. In general, the aim is to keep the "establishment" phase to less than a century and to raise planetary temperature sufficiently to unlock regolith bonded atmosphere and water as was first demonstrated on Mars in the Sol system. The process is usually used to terraform planets in systems that already have colonised worlds and is rarely used in new systems unless that system has valuable resources and is owned by an existing colony system.
Phase 3: Terraforming
Once a world is judged to have entered "Precambrian" state (or better) the true terraforming phase can begin; the aim of terraforming is to bring the world within the parameters listed above in "Candidate Selection". The process relies partly on mechanical and partly on biological methods; mechanical methods are mostly achieved using the terraforming cell. The terraforming cell is a complex, hive-like, beast consisting of a factory, by far the largest unit, which is based around a large semi-mobile three-dimensional nano-printer and contains a fusion power generator and the brain of the cell. The factory unit governs the storage units ("hoppers"), mineral processors ("smelters"), assembly units ("workers") and garbage handlers ("scrappers"). It cooperates with the semi-independent minerals acquisition units ("scavengers") and reconnaissance units ("scouts"). All units except the factory run on ultra-efficient rechargeable batteries and as such are required to return periodically to the factory unit for replenishment. The cell will be deployed in an area rich in the resources required to create more units and the first task of the factory unit is to begin creating more worker units. Once the factory is receiving as much minerals as it can handle it begins the process of creating a new factory unit. The new terraforming cells aim to reach "critical density" which is typically considered to be approximately one factory per thousand square kilometres. Under optimum conditions, on a planet with a land surface of around one hundred million square kilometres and depending on atmosphere composition and mineral availability, replication can occur as frequently as once a week; this could produce the required number of factories within six months to a year. Once built and activated the new cell will move to a new area around one hundred kilometres from the creator factory and begin the same process; movement to the new location will take around a day depending on terrain although the "offspring" of cells closer to the first cell will progressively find their journeys longer as factory coverage spreads out from the original cell. The standard terraforming process is: Once "critical density" has been achieved cells switch production to terraforming units including wind or solar powered "Robinson" heat generators and units designed to introduce ammonia and biodegradable fluorocarbons into the high atmosphere to help initiate the required greenhouse effect. With factory cells every thousand square kilometres producing much simpler terraforming machines a planet's environmental conditions can be changed rapidly (under optimal conditions temperature can be alerted by as much as 0.05% of a degree per day) and, in principle, an Earth-size arctic planet at around 250K might be converted to an Earth-like 290K in as little as three years. When a planet is stabilised the majority of the terraformers drop into a hibernating state but in some cases, the terraforming effect needs to be maintained and the terraformers remain active to ensure the planet remains habitable. Biological terraforming involves the use of bio-engineered organisms to start terraforming (Ecopoeisis) and later stages include the seeding of balanced microorganisms, flora (forestation) and fauna.
Phase 4: Colonisation and Environmental Management
In most cases, colonists will start to establish small domed communities before terraforming is complete as agriculture will be an important facet of life for the newly transformed planet. The majority of terraformed planets exist in a maintained status which is to say that a number of terraforming cells remain active in the management of the planet's ecosphere. In general terms, a small amount of environmental decay is acceptable but if eco-breakdown is foreseeable within the next ten thousand years stabilisation measures are deemed necessary.

I'm not insane sir. I have a finely calibrated sense of acceptable risk.