Travel through a gate, across a hyperspatial interface, is essentially instantaneous. As such, space travel, including all combat, must occur in real space and almost always within the confines of a stellar system. A system is a vast three-dimensional space and navigation within it is normally referenced with respect to that system's primary. All systems have at least one navigational beacon, designated by that system's reference code and a number, for example, Sol's primary beacon is "SOL/01". In most systems, the beacons are component parts of that system's hyperspace gate which will usually be positioned at the system's most significant L4 LaGrange. Broadcasting their information on a select series of high-spectrum bands for that purpose alone, beacons emit coded signals that allow ship computers to determine the system's various reference points, the position of the ship and other objects.

Standard Concepts of Spatial Navigation NOTES: From these it is possible to derive some standard definitions for any given object in a system: 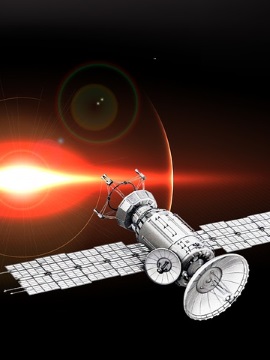 Bearings and headings are measured in degrees on the stellar plane (X) plus or minus a number of degrees on the vertical plane (Y). For example, one hundred and eighty plus zero [180+0] indicates a heading parallel to the prime meridian, in the exact opposite direction but giving no information as to where in the system the line is drawn. Zero plus zero [0+0] indicates the exact opposite of the above i.e. a heading parallel to the prime meridian and running in the same direction. In a three-dimensional space, it stands to reason that there are an infinite number of lines running parallel in a specific direction i.e. below, above, to the side etc. and nothing about a heading reveals where in the system that line is drawn. Bearings are identical to headings except they are relative to the observer. The location of an object is defined using the same system as headings except that there is an additional final value that indicates a distance from the centre of the system, the system primary's core. For example, zero plus zero (0+0) specifies a location somewhere along the line of the prime meridian in the direction of the prime meridian point. A third value, measured not to the object itself but to the point where it would intersect the stellar (X) plane perpendicularly, gives the distance. Again therefore, it stands to reason that a location of 0+0/1 is always the prime meridian point and 0+0/0 is in the centre of the system primary, not a particularly healthy place to be. Distance units are typically measured in AU but many Naval Officers find that cumbersome and prefer to deal with distances in thousands or millions of kilometres. So, a ship's absolute position in a system would be expressed by the formula:

Where: The final value of interest is the object's velocity which is almost always an absolute system value and expressed in kilometres per second (km/s). ZERO ZERO plus NINE ZERO slash ONE ZERO ZERO KAY (0+90/100K) indicates a heading of directly upwards at one hundred thousand kilometres per second. NOTE: Thousands of kilometres are denoted with a "K" (KAY) and millions with an "M" (MIL).