Largely unchanged from its Earthly roots about 500BCE when its founder, Siddhartha Gotama who was also known as "The Buddha", was awakened. Like their namesake, Buddhism, with nearly half a billion followers across The Extent is synonymous with "Awakening" or "Enlightenment". Buddhists do not believe that their founder is a god and do not worship him or idols of him but they do pay respect to images of him. They also believe that they will one day reunite with him on Karma when the galaxy is finally at peace with itself. 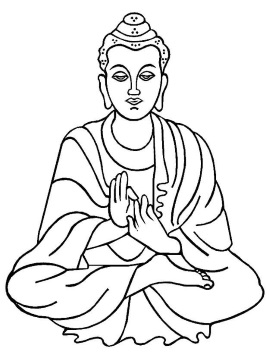 To many of its followers, Buddhism is more of a philosophy, a way of life, than a religion and it tells them to lead a moral life, to be mindful and aware of their thoughts and actions as well as to develop wisdom and understanding. Many Buddhist communities are relatively poor because Buddhism teaches that wealth is not the key to happiness and cannot be permanent. There are Four Noble Truths in Buddhism: Buddhists accept the five precepts that one must not take life, not take anything not freely given, refrain from sexual misconduct and overindulgence, not tell lies and avoid intoxication (lose mindfulness). These form a moral code and it is interesting to note that several first-generation AIs have embraced Buddhism as their philosophy. Karma embraces the idea of cause and effect which is to say that one's actions have consequences because it explains human inequalities and emphasises the importance of responsibility. Buddhism teaches wisdom in conjunction with compassion, adopting the middle-ground to develop goodness and knowledge simultaneously, and that true wisdom is gained by experience and understanding. Compassion includes qualities of sharing, readiness to give comfort, sympathy, concern, caring. In Buddhism, we can really understand others, when we can really understand ourselves, through wisdom. Many Buddhists consider themselves to be seekers of truth or knowledge. To them, the faith helps them lead a more moral life, to be mindful of their thoughts and actions as well as develop wisdom and a deeper understanding of the human place in the galaxy. As a result, Buddhists tend to peacefully coexist with believers of other religions.

If you want me to treat your ideas with more respect, get some better ideas.