Originally called Tachyon Space, research into the possibility of travelling in the same arena as hyper-radio led to the creation of the Alternate Dimension Project. Based on simple tests using a two-metre doorway a probe was later recovered providing evidence of the reality of Tachyon Space. Tests were conducted between the first gate and a second mounted on board and ageing freighter, The Quantum Particle, including tests appearing to pass directly through the Sun. It required the work of a mutant researcher, Eiko Nakamura, to solve the puzzle of creating targeted wormholes when she was found to have some special abilities. She was able to make accurate predictions of where a given wormhole, the coordinates required to link a wormhole to a specific area of real-space, would emerge. The real problem was the mathematics involved, the actual numbers involved were so mind-bogglingly huge and shifted extremely rapidly and it was clear that no normal human could handle the equations. Nakamura found that certain mutants could supply the relevant coordinates to bring a vessel out in real space, she wasn't able to explain how even the subjects believed they simply "knew" the coordinates. The project had a solution and was immediately granted massive funding. 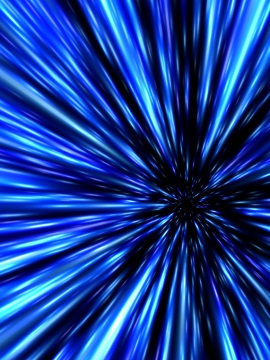 The results of the Alternative Dimension Project were published in a leading physics journal as well as a number of pieces in respected popular science magazines but Tachyon Space was renamed hyperspace by the popular press. Worse news was to follow, mutants involved with hyperspace travel started to develop symptoms, their bodies deteriorating and reporting nightmares of pain and physical damage. The evidence eventually revealed that overexposure to tachyon space adversely affected "sensitives" and would eventually be fatal. As the research continued, it was discovered that hyperspace had fluxes, eddies and even storms that needed to be handled and that opening doorways into the alternate dimension could cause more disturbance and the positioning of the gate in both real and alternate spaces was crucial. Such places, where hyperspace was as calm as possible, came to be known as Hyper-Loci and almost always coincided with major LaGrange points in a system. Gates were developed with powerful computer systems that allowed them to maintain a fixed link to another "paired" gate. It allowed for the hope that a network of permanent links could be established and that Earth could once again be linked permanently to her colonies. With that aim in mind, a new Discovery class of ships were built and launched to the stars to explore new and existing systems as well as create the network.